We sampled four of the The Balvenie’s Single Malt Scotch Whiskies, and had the chance to pair them with four types of cheese from a local cheesemaker – Milky Whey Cheese. 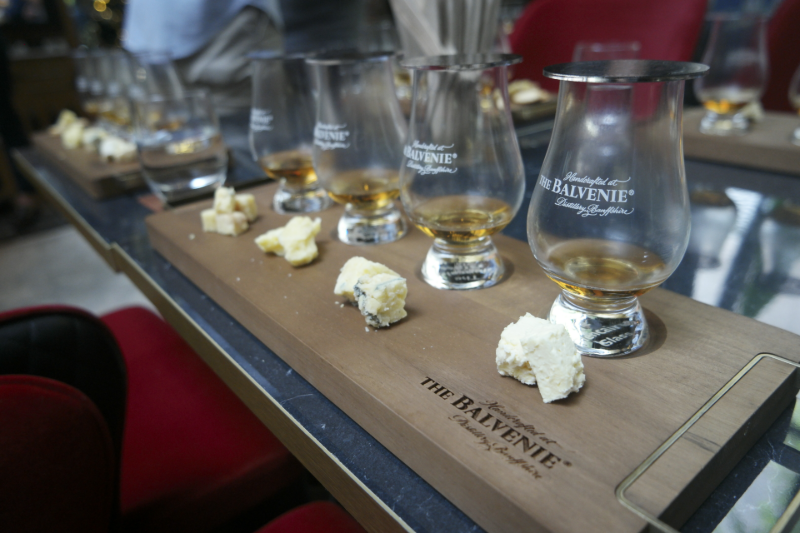 Ever had a whisky tasting that involved… cheese? Luckily, we have and we are prepared to tell you all about it. While it seems an unusual pairing, the different flavours found in various cheese can and do complement the flavour profiles of whiskies of different ages.

Recently, we sampled four of the The Balvenie’s Single Malt Scotch Whiskies, and had the chance to pair them with four types of cheese from a local cheesemaker – Milky Whey Cheese.

The Balvenie’s range of single malt whiskies are made by Malt Master David C. Stewart MBE in the Scottish distillery in Speyside, Scotland. Today, it is the only distillery that still grows its own barley and uses its own maltings. It even has its own coppersmiths and coppers, on site, making it a specially handcrafted brand of whisky.

The pairings were the selection of none other than the newly appointed Regional Brand Ambassador for the Balvenie in Southeast Asia, James Cordiner who also introduced and explained these unique pairings to us. James brings with him a wealth of knowledge on the craft of whisky-making and gave us some insights into the world of single malts.

The first sip in the flight of whiskies that we sampled belonged to The Balvenie 12-year-old Double Wood. The DoubleWood spends 12 years maturing in traditional whisky casks, American Oak ex-bourbon barrels and hogsheads, and then it is moved to Spanish oak ex-Oloroso sherry casks for an additional nine months.

It had a distinct honey and toffee notes with subtle spices such as cinnamon and ginger. James chose to pair this 12-year old with the gentle smoke of the Smoked Melaka Cheese, as a contrast to the sweetness of the whisky. The high alcohol content of the whisky helped to cut through the cheese and release more of its flavours. A good start to warm up the palate for the remainder of the flight.

The next whisky on the journey was The Balvenie Caribbean Cask, aged for 14 years. This whisky had the traditional honeyed taste of the 12-year-old, with additional notes of fruit and a soft, lingering finish. For this pairing, James chose to go with a 12 month old cheese known as Rik Cheese. The whisky had flavours that are more tropical such as pineapple, lemon grass, as well as some black pepper, however it still carried some sweetness, with a hint of citrus. The Rik Cheese had a nutty flavour with some zest in its finish, which complemented the notes of citrus found in the whisky.

James then moved us on the next whisky in the flight, The Balvenie 17-year-old Double Wood. Matured first in American oak barrels, this whisky is then transferred to European oak sherry casks, the latter adding a depth and fullness to its flavour.

The 17-year old Double Wood had a sweet taste with hints of dried fruit, toasted almonds and cinnamon, as well as traces of oak and deep vanilla. James paired the 17- year old with the strongly flavoured and creamy Jade Blue Cheese, to balance out the depth of flavours found in the whisky. While it is a blue cheese, it had a pleasant and creamy texture with a hint of sweetness in it.

The last stop on this whisky flight was The Balvenie 21-year old Portwood. This beautiful whisky has a nose of fruity and ripe raisins, with a hint of nuttiness. It has tasting notes of fruit, honey and spices in a rich blend of flavours.

It lingered with a nutty, gentle finish on the palate. James paired this 21-year-old with a Triple Cream Alba Brie Cheese, an equally luxurious creamy cheese with a delicate and subtle taste. The cheese beautifully complemented the notes of honeyed fruits, dates, prunes and figs found in the whisky, both possessing a rich, lingering finish on the palate.

The Balvenie Single Malt Scotch Whisky is produced by William Grant & Sons, Ltd, an independent family-owned distiller founded in 1886 in the United Kingdom. To find out more about their selection of single malts, click on to their website here. 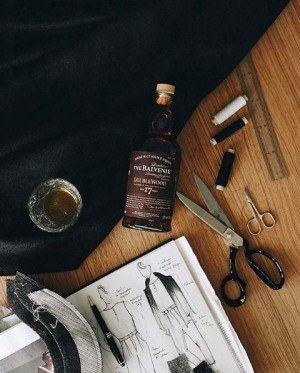 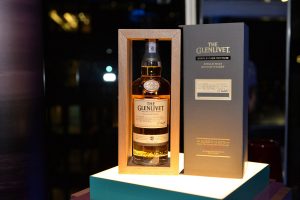 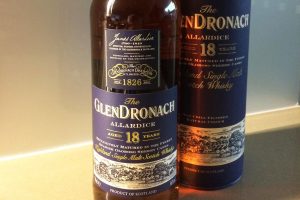