Created by French master perfumer Calice Becker in 1999, the initial fragrance has since been reformulated to include a number of different concentrations. 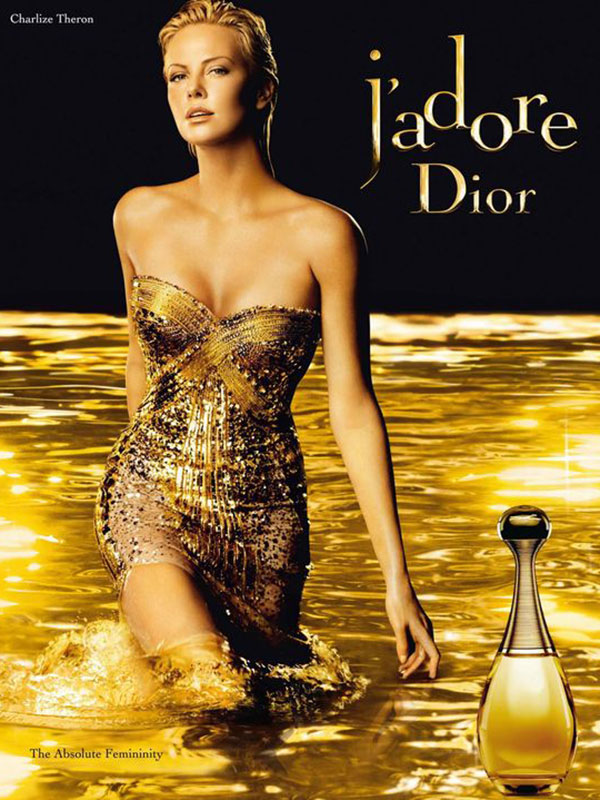 While there seems to be a new fragrance launch almost every other week in recent years, few have achieved an iconic status like that of Christian Dior’s J’Adore. At the mention of its name, everything from the gold packaging of the bottle to its floral scent and the face of its ad campaign comes to mind, all at once. How many others can boast the same?

Of course, that also depends on which era you’re talking about, given its timeline dating almost two decades back. Created by French master perfumer Calice Becker in 1999, the initial fragrance has since been reformulated to include a number of different concentrations.

Despite the new formulas, each J’Adore fragrance is made with the same feminine, floral DNA derived from flowers in the House’s gardens. The different blends come with its own reinterpretation of the signature figure 8 bottle, marked by gold rings around its neck.

Here’s a brief timeline of the J’Adore fragrances along with the “golden girls” who fronted their respective ad campaigns. 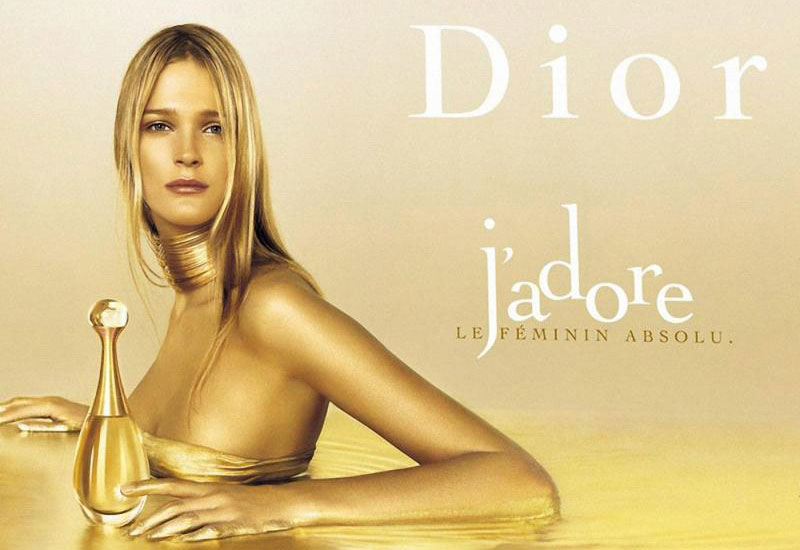 The first J’Adore fragrance stole the hearts of many a young woman with its delicate notes of mandarin, champaca flower, ivy leaves, jasmine sambac, Turkish rose, blackberry musk, and plum. Carmen Kass, who was the first face of the fragrance, fronted the ad campaign wearing a gold necklace to match the bottle’s design. 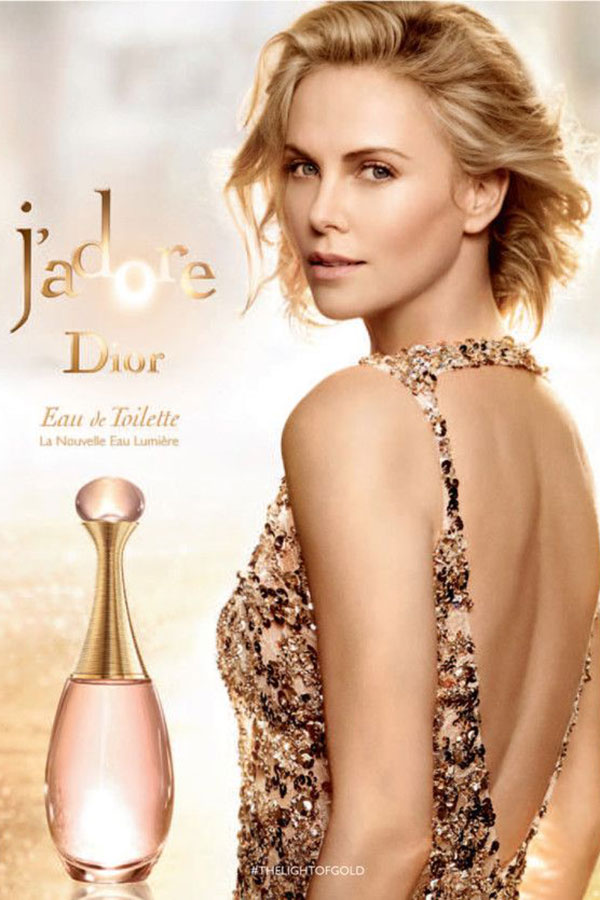 Several years later came the EDT version, this time formulated by Francois Demachy, Dior’s in-house perfumer-creator. The EDT was then reformulated several times over the next decade. Today's J'Adore EDT has the top notes of mandarin, followed by heart notes of rose, jasmine, orchid, plum and base notes of neroli, vanilla, and musk. Charlize Theron, who came on board as ambassador in 2004, starred in the ad campaign for the fragrance published in 2016. 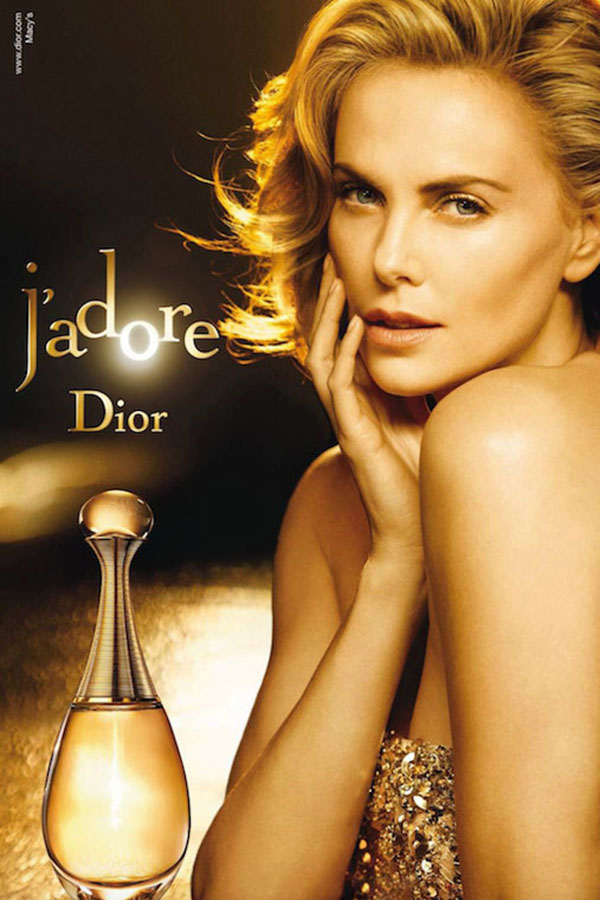 The L’Absolu further accented the floral character of its predecessors, combining Damascena rose absolute, sambac jasmine absolute and Indian tuberose for an intense, sensual blend. Though no official ad campaign was released for the fragrance, Charlize continues to play the golden girl of J'Adore. 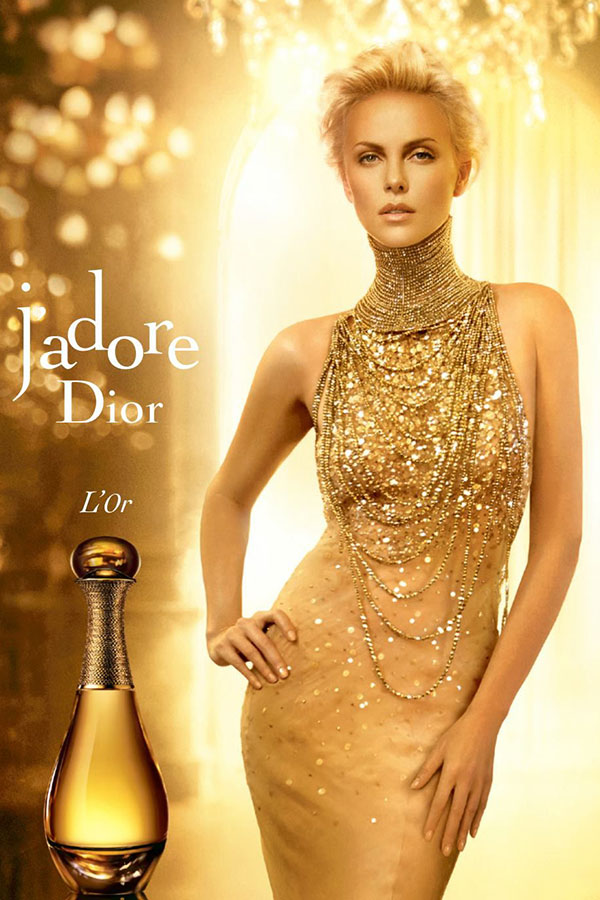 Stronger and more intense than the rest, the new L’Or fragrance bursts with the notes of Grasse jasmine, May rose, tuberose and vanilla. It makes a sensuous debut in a bottle featuring a finely engraved new necklace. Equalling the bottle’s exquisite beauty is Charlize in an embroidered gold dress for the ad campaign. 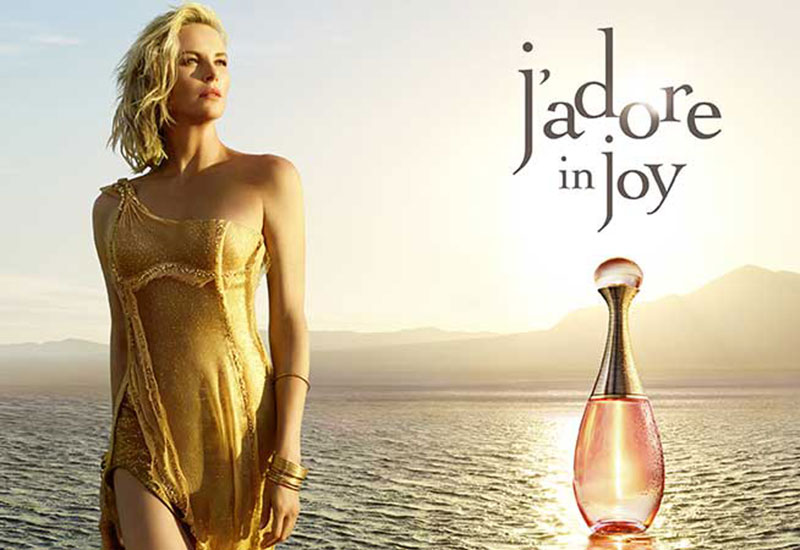 The most recent to join the collection is J’Adore Injoy, featuring a daring floral-fruity-salty accord. It starts off with the fresh scent of fleur de sel, before unfolding its heart notes of tropical ylang ylang essence and sinking further into ripe, juicy peach notes. Charlize Theron stars yet again in its video campaign, to which she called “the most truthful to who I am and what I love, and where I feel truly comfortable.”

You may also like: Natalie Portman’s ad campaigns for Miss Dior through the ages

For more information or to see the full range of J’Adore fragrances available now, log on to the official website here. 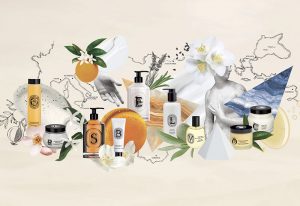 Wishlisted: The most exciting beauty launches of May 2020 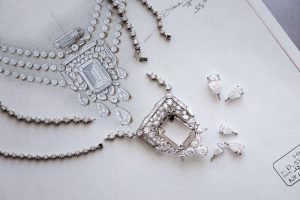 Chanel dedicates a 55.55-carat diamond necklace to the 100th anniversary of N°5 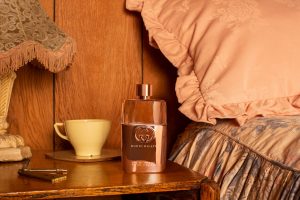 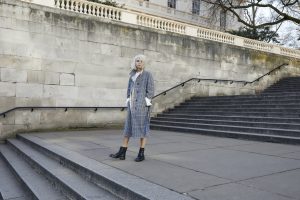 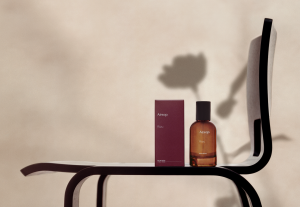