It’s not just a Glenlivet whisky. It’s The Glenlivet.

The next time you’re about to order a drink of The Glenlivet, make sure you’re saying it right. It’s not just a Glenlivet whisky – it’s The Glenlivet. It may seem a simple addition, but the grammatical article is one richly intertwined with the history of the distillery.

In three letters, it sums up the tenacious spirit of its founder and his generations after him, commemorating their tireless work to create the definitive whisky, against which all Speyside single malts are benchmarked.

It all began in the early 1800s, in the remote and isolated Livet valley. This quiet expanse of green was perfect for all things illicit and it is here that founder George Smith set up his quiet haven to tinker, experiment and distill a whisky that would soon become world renowned. Away from the prying eyes of Customs Officers and soldiers, he created and tasted the first dram, illegal at the time as much as it was the perfect embodiment of the sweetness of the valley.

An illegal dram it was, but it didn’t stop King George IV from stopping by and trying a drop in August 1822. It got his royal approval, which set a string of events in motion for George and his illicit distillery. 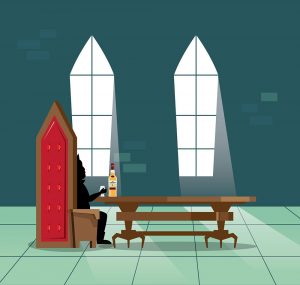 1824: The Smuggler of Smugglers

Two years after that fateful tasting, a change of legislation was approved, providing George and his prized whisky a window of opportunity to be recognised. He rode to Elgin to obtain his license to become the first legal distiller in the parish of Glenlivet. His foresight didn’t sit well with the other illegal distillers, who threatened to take him, along with his distillery, down. As protection, a pair of flintlock pistols never left his side and he made it loud and clear that he wasn’t afraid to use them. This courage of his set the foundation for The Glenlivet whisky today. 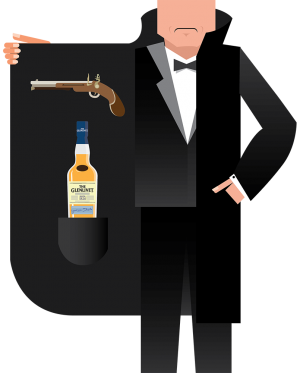 By the late 1930s, George’s distillery was producing more than 200 gallons a week. This meant more hands were needed to meet the expansion in producing, bottling, distribution as well as marketing. This was when Andrew Ushers & Sons of Edinburgh came on board as sales agents, helping spread the word of the whisky.

From the green hills of Scotland to the smoky skies of London, The Glenlivet continued to spread far and wide. It even became favourited by renowned author Charles Dickens, who once wrote to his friend urging him to try “the rare old Glenlivet”, one which exceeded his great expectations. It is his choice of word in describing the whisky that planted the first idea seed of trademarking the name.

George came to pass on November 2, 1871. Everything he built hence fell into the hands of his youngest son John Gordon Smith, who was at the time away training for a career in law. Filial obligations saw him returning to pick up the reins of the business upon his father’s demise, carving a new era for the whisky.

Over the next decade, competitors were crawling in from left, right and centre, each trying to take the name ‘Glenlivet’ for themselves to capitalise on the notoriety of the George’s storied past. With his background in law, John found the solution to that little predicament. He fought hard to attach a simple but powerful three-letter word in front of his family’s whisky and succeeded. In 1884, his father’s legacy, and what will also be his, became known as the one and only The Glenlivet, the name of the golden liquid we know and love today.

John’s second great-nephew Captain Bill Smith, a decorated war hero from World War One, took over in 1921, and was immediately met with two challenges: The Great Depression and Prohibition in the USA. With perseverance, he pulled the distillery through those hard times, emerging triumphant through those murky years after the repeal of the prohibition. One of The Glenlivet’s biggest customers under his leadership was the Pullman Train Company, that began serving miniature bottles of the whisky onboard its carriages, helping to spread the fine whisky across the continent.

With the growth of land, sea and air transport in the middle of the century, The Glenlivet spread its wings equally as rapidly to the United States and many parts of the world. It soon became The Whisky to be seen drinking, solidifying the significance of the word ‘The’ in its name. 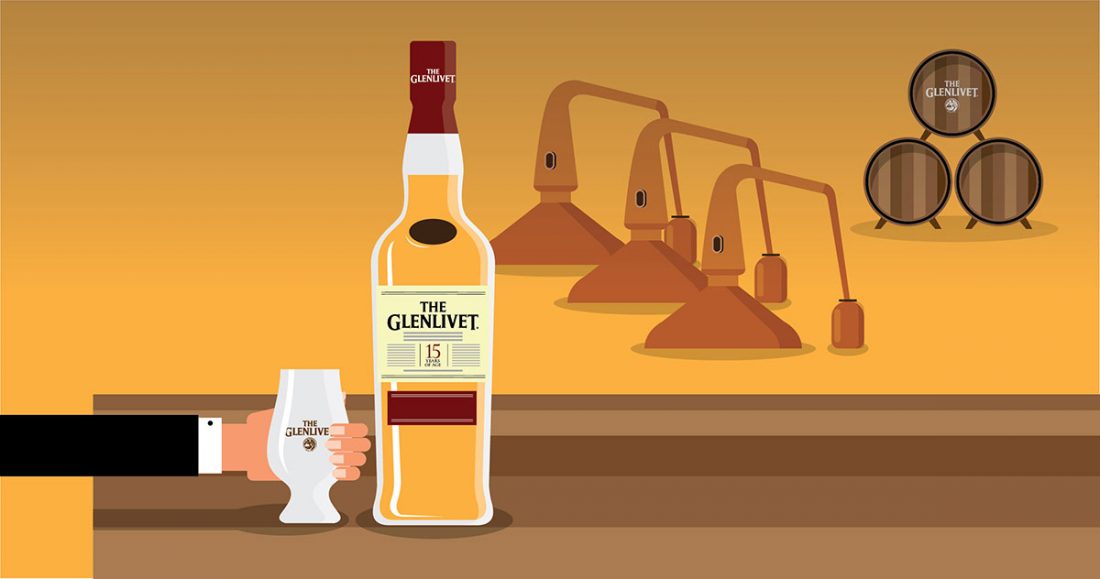 After almost 200 years since its distillery opened its doors, The Glenlivet is today the benchmark that all other Speyside single malts are measured against. The spirit – both literal and figurative – continues to live on under the careful watch of Master Distiller Alan Winchester, who most recently introduced The Glenlivet Founders Reserve, a special batch of distinct, smooth and fruity liquid that captures the first vision of George Smith in 1824.

As The Glenlivet continues to grow and innovate, it pushes forward guided by the wise words of Captain Bill Smith Grant: “If we can’t make a good whisky, then we shouldn’t make any whisky”.

We’ll raise a glass to that.

Learn more about the whisky at the official website here.