Introducing the Chopard Alpine Eagle collection, born of a passion for the Alps and inspired by the eagle that inhabits its lofty grandeur. 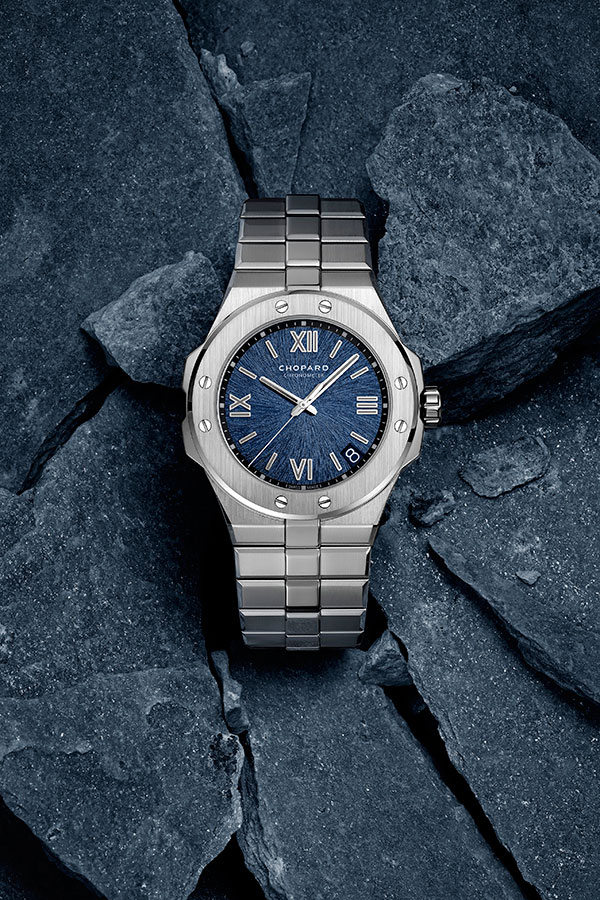 In 1980, one Karl-Friedrich Scheufele presented his very first watchmaking project to his father. The idea fell on good soil and grew to become Chopard’s iconic first steel sports watch – the St Moritz. It was a risk for an artisan specialising in gold and diamond-set watches, but the invention proved to be a best-seller for the next decade.

Scheufele was only a 22-year-old employee in the family Manufacture then; today, he proudly holds the title of co-president. Just as he has spread his wings and steered the company to great heights from that pioneering innovation, so must it evolve with the times for a new generation of watch buyers.

Enter the St Moritz’ reincarnation: the Chopard Alpine Eagle collection, born of a passion for the Alps and inspired by the eagle that inhabits its lofty grandeur.

With the launch of this new icon, the story comes full circle. Though Karl-Friedrich Scheufele is to credit for the development of the Alpine Eagle, it was his son, Karl-Fritz, who suggested it – like the former did with his father 40 years ago.

A force of nature

As its name suggests, the Alpine Eagle features many subtle references to the raptor and its habitat. For one, the rock-like textured dial draws inspiration from the eagle’s iris, while the watch hands allude to the bird’s feathers. 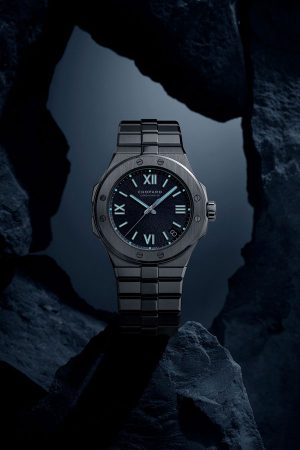 Both hour and minute hands as well as hour markers are also coated with Super-LumiNova® Grade X1 to enhance night legibility.

On the other hand, the icy steel integrated case and bracelet evokes alpine glaciers. Its round bezel is punctuated by four pairs of screws – each pair at a cardinal point – which serve to guarantee a water resistance of up to 100 metres, besides aesthetic purposes.

The watch’s flat surfaces are carefully satin-brushed to create alternating matte and polished effects under different light conditions, mirroring the changing appearance of the snow, torrents and rocks of the Alps.

Ingot-shaped links make up the watch bracelet, topped with an elevated central cap. The case is further distinguished by a protrusion protecting the crown, which is engraved with a compass rose. According to Chopard, this engraving symbolises “contemporary eagles capable of choosing the right direction in pursuit of their destiny” today. 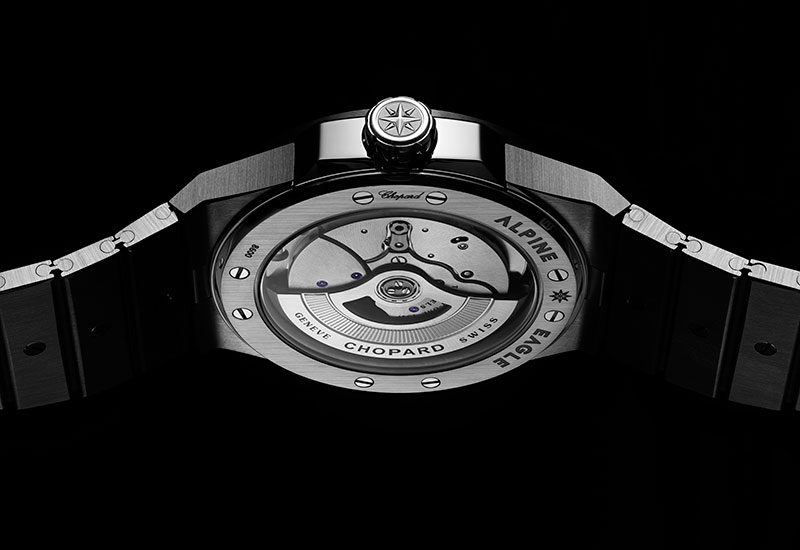 At launch, the Alpine Eagle is available in 10 references, including gold, bi-material or diamond-set gold, and of course, steel. But it wouldn’t be much of an innovation without making its own revolutionary mark in the industry. This is where the Lucent Steel A223 comes in.

Created from a re-smelting process, this material boasts properties akin to surgical steel, making it hypoallergenic and dermo-compatible. Additionally, its 223 Vicker’s strength boasts a “unique hardness” that is 50 percent more resistant to abrasion than the standard.

Thanks to its homogenous crystal structure, the steel has far less impurities than conventional steel, thus giving it brilliance and lustre not unlike gold and diamonds.

It took over four years of research and development for the Manufacture to produce such a rare, precious metal under the most stringent provisions – a testament to its commitment to the art of watchmaking.

The latter 8-ligne movement is one of the smallest to boast a COSC certification, which is already considered rare for timepieces in this category. It’s no wonder the Manufacture proudly showcases this via the watch’s transparent sapphire crystal back.

Beyond launching just another collection inspired by nature, Karl-Friedrich sought to associate it with sustainability. The hiking and skiing enthusiast thus became a founding member of the Eagle Wings Foundation, a multidisciplinary environmental project to raise awareness on the significance of Alpine biotopes in all its beauty and fragility.

Its first project, Alpine Eagle Race – in which participants can observe images taken by a camera on an eagle launched from five Alpine peaks across five days in five different countries – kicked off earlier this month to portray the truth about glacier melting and climate change.

The race aptly ended in St. Moritz as an homage to the creation that inspired Alpine Eagle.

Learn more about the collection and the Eagle Wings Foundation on the brand’s official website here. 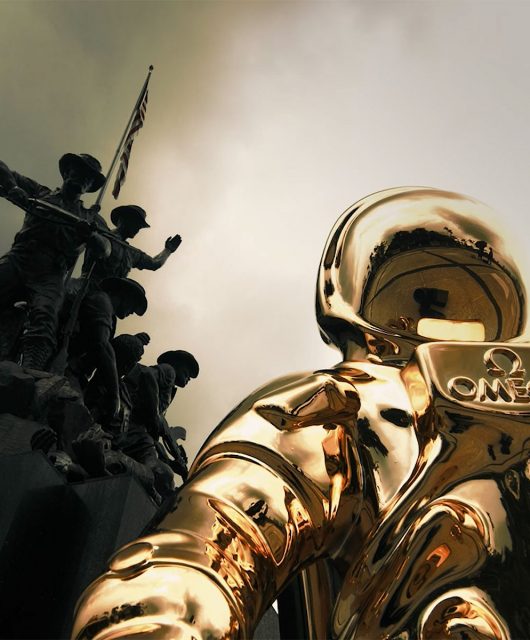 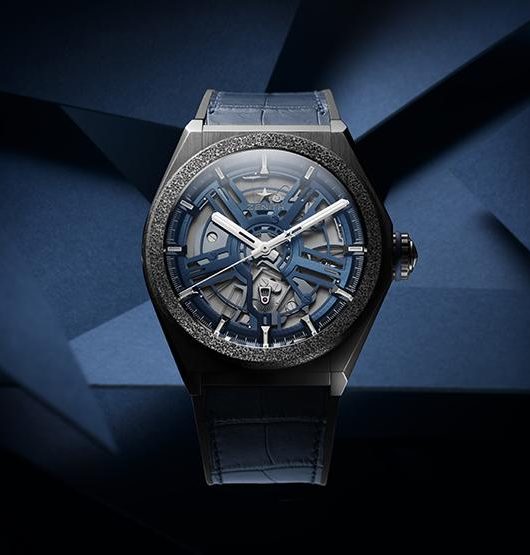 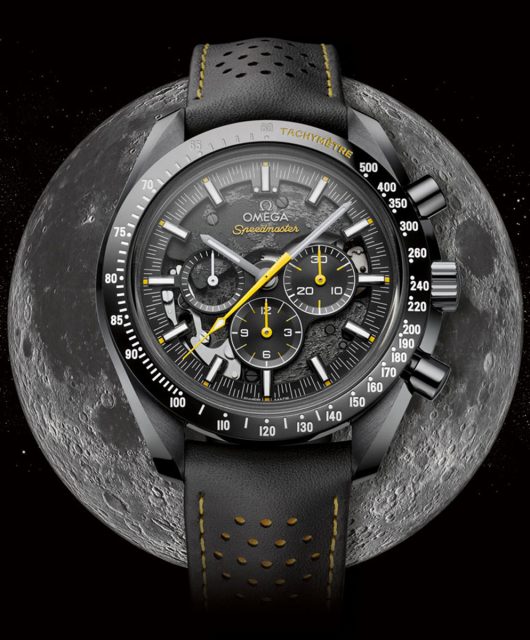 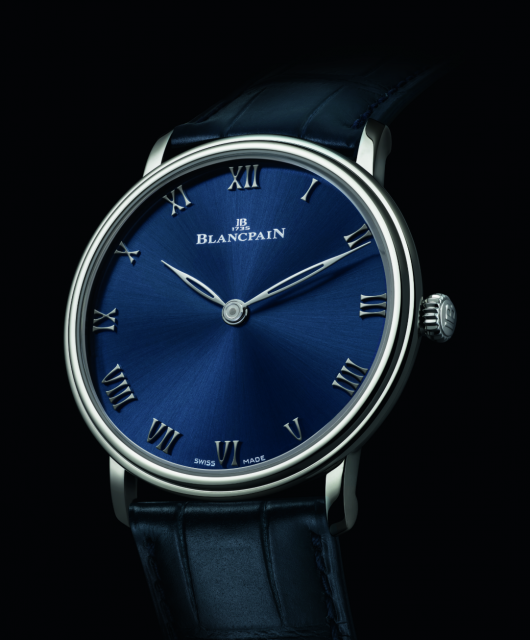 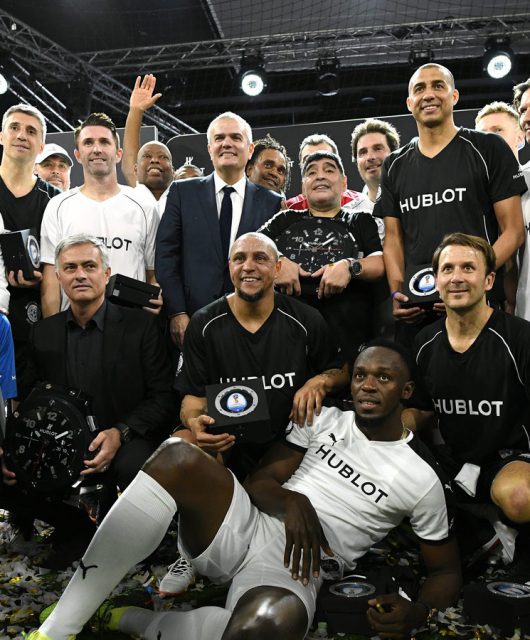