Eight years ago, the United Nations officially recognised June 8 as World Oceans Day with the singular objective of celebrating our Earth’s seas and shine light on the importance of keeping them clean.

The cause reached a multitude of organisations around the world, among them watch brands like  Rolex, Blancpain, Omega, and IWC Schaffhausen, among others.

We look at how each watchmaker has lived up to the call.

Rolex looks to education in its support for ocean conservation through its sponsorship of the annual Our World Underwater Scholarship Society that selects a scholar annually to work in the field of marine conservation. It has also worked with movie producer James Cameron on a submersible vehicle – the Deepsea Challenger, named after its Deepsea dive watch – with which Cameron used as the star of a National Geographic movie, the Deepsea Challenge 3D. W rolex.com

Omega’s relationship with the ocean is a long and enduring one, being the makers of the first commercially-available divers’ watch. It is also the long-time partner of the GoodPlanet Foundation, with whom it had once sent a crew  to film the Planet Ocean documentry, directed by Yann Arthur-Bertrand, highlighting awareness of underwater issues. Omega also donates a portion of the proceeds from the sales of the Seamaster Planet Ocean GoodPlanet watch to causes that preserve the sea grasses and coral reefs in Southeast Asia. W omegawatches.com

IWC is a proud supporter of several causes, among them the Charles Darwin Foundation that champions the conservation of the Galapagos and the Cousteau Society to explore the ocean and learn more of the delicate ecosystem of its depths. IWC also has several limited edition timepieces built for these causes, the proceeds from which it donates a portion of to more preservation work. W iwc.com

Blancpain has worked closely with the United Nations on a few occasions to raise awareness on ocean conservation. Last year, it co-hosted a travelling exhibition of underwater photography with the UN and was a key sponsor in the Laurent Ballesta Gombessa 1 Expedition in South Africa a few years back. Most recently, it released a new edition of its Fifty Fathoms Oceans Commitment Bathyscaphe Flyback Chronograph diver’s watch, partial proceeds from which go to support the causes. W blancpain.com 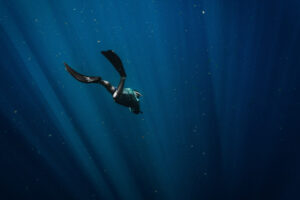