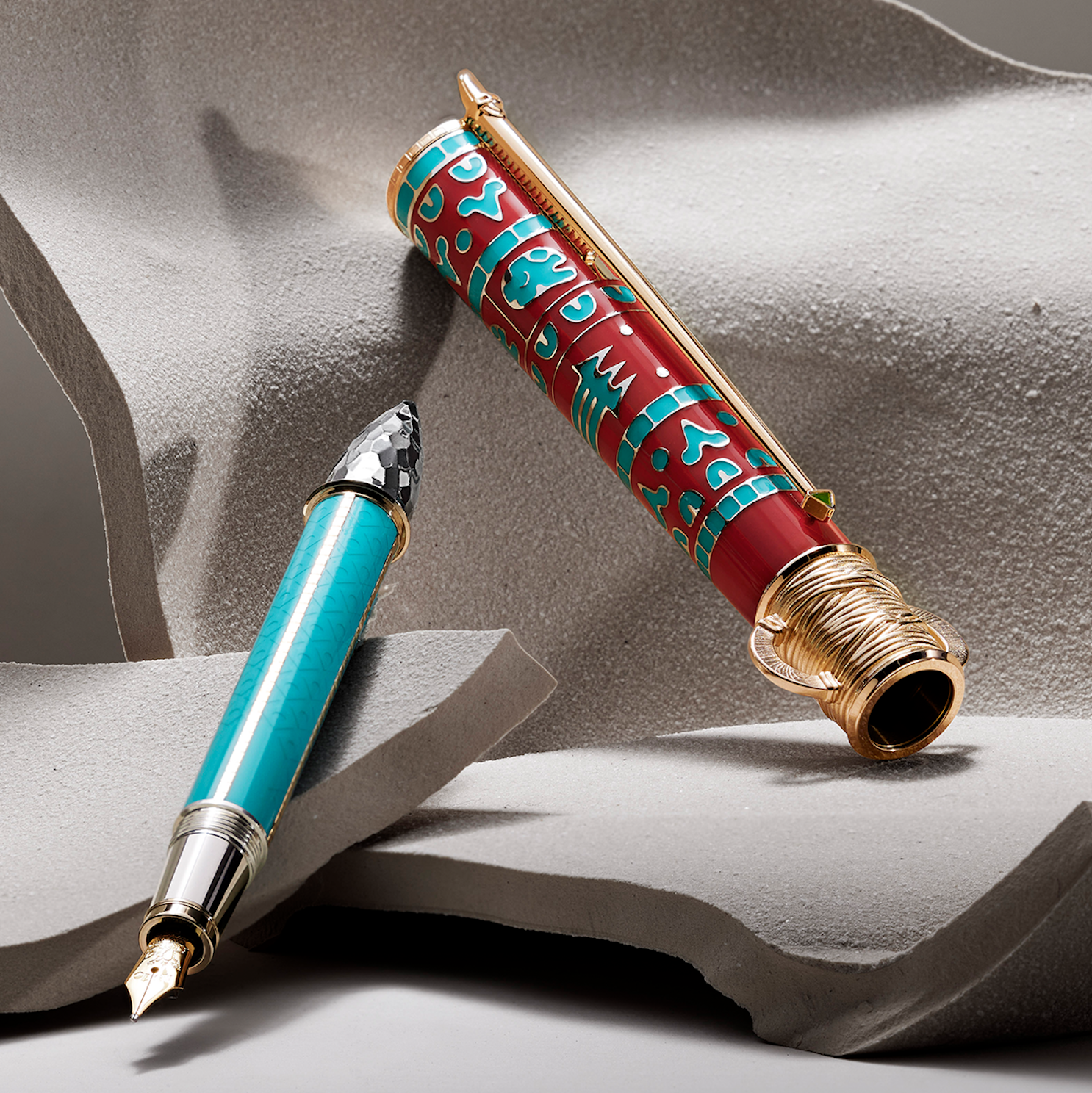 Known for its rich heritage in the fine culture of writing, Montblanc has always been an actively engaged in the promotion of culture and the arts. One of their ways of engagement has been to recognise and acknowledge the exceptional contribution of modern-day patrons of the arts around the world for the past 28 years with an annual award. Each year, Monblanc introduces a Limited Edition writing instrument – coinciding with the Montblanc de la Culture Arts Patronage Award – that pays tribute to the cultural legacy and patronage of a historical patron of the arts.

This year, they introduced the Montblanc Patron of Art Edition which celebrates the life and influence of Moctezuma I (c. 1398 – 1469).

The four limited editions were made in partnership with Mexico’s Instituto Nacional de Antropología e Historia. They illustrate the story of the cultural achievements of Moctezuma Ilhuicamina who was elected ruler of the great Aztec Empire in 1440 and reigned for nearly 30 years during its golden age. Aside from being credited for shaping the image of the Aztec state that has endured to this day, he also expanded the borders of his empire all the way to the Gulf of Mexico. The capital city Tenochtitlán – now known as Mexico City – flourished under his rule with the construction of new buildings, sculptures, and lush botanical gardens.

Montblanc Patron of Art Homage to Moctezuma I Limited Edition 4810 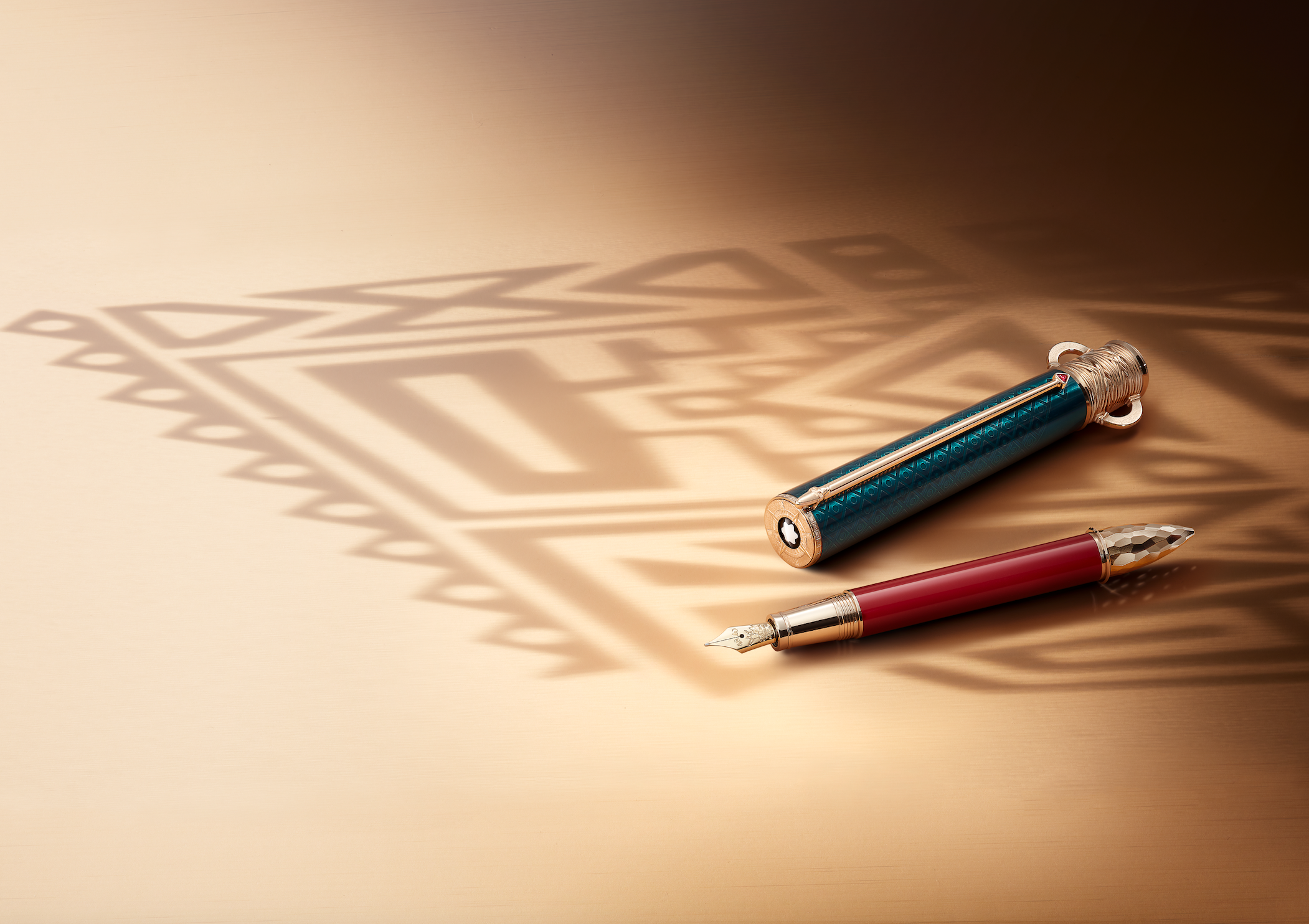 The Montblanc Patron of Art Homage to Moctezuma I Limited Edition 4810 honours Moctezuma’s credentials as a great warrior. It was inspired by the atlatl, an Aztec spear-throwing weapon used to propel spears or darts over long distances. The cap features a gold-coated design reminiscent of the weapon’s thread-wrapped handles, while the lacquer colours of the cap and barrel – petrol and carmine red – represent the colours of Aztec culture and the royal cloak. The pattern on Moctezuma I’s cloak symbolises his high rank, and is represented on the cap underneath translucent lacquer. The cap is further embellished with Aztec glyphs from the Mendoza Codex, indicating the year in which the reign of the Aztec king began and ended. An engraving of a quetzal’s feather is represented in the spear-shaped elongated clip, and crowned with a red stone. The contour of the hammer-finished cone is based on a traditional Aztec sacrificial knife.

Finishing off the pen is is the handcrafted 18-karat gold nib adorned with an engraving that’s inspired by the Aztec glyph for Tenochtitlán: a three-armed cactus with a royal diadem and two scrolls.

Montblanc Patron of Art Homage to Moctezuma I Limited Edition 888 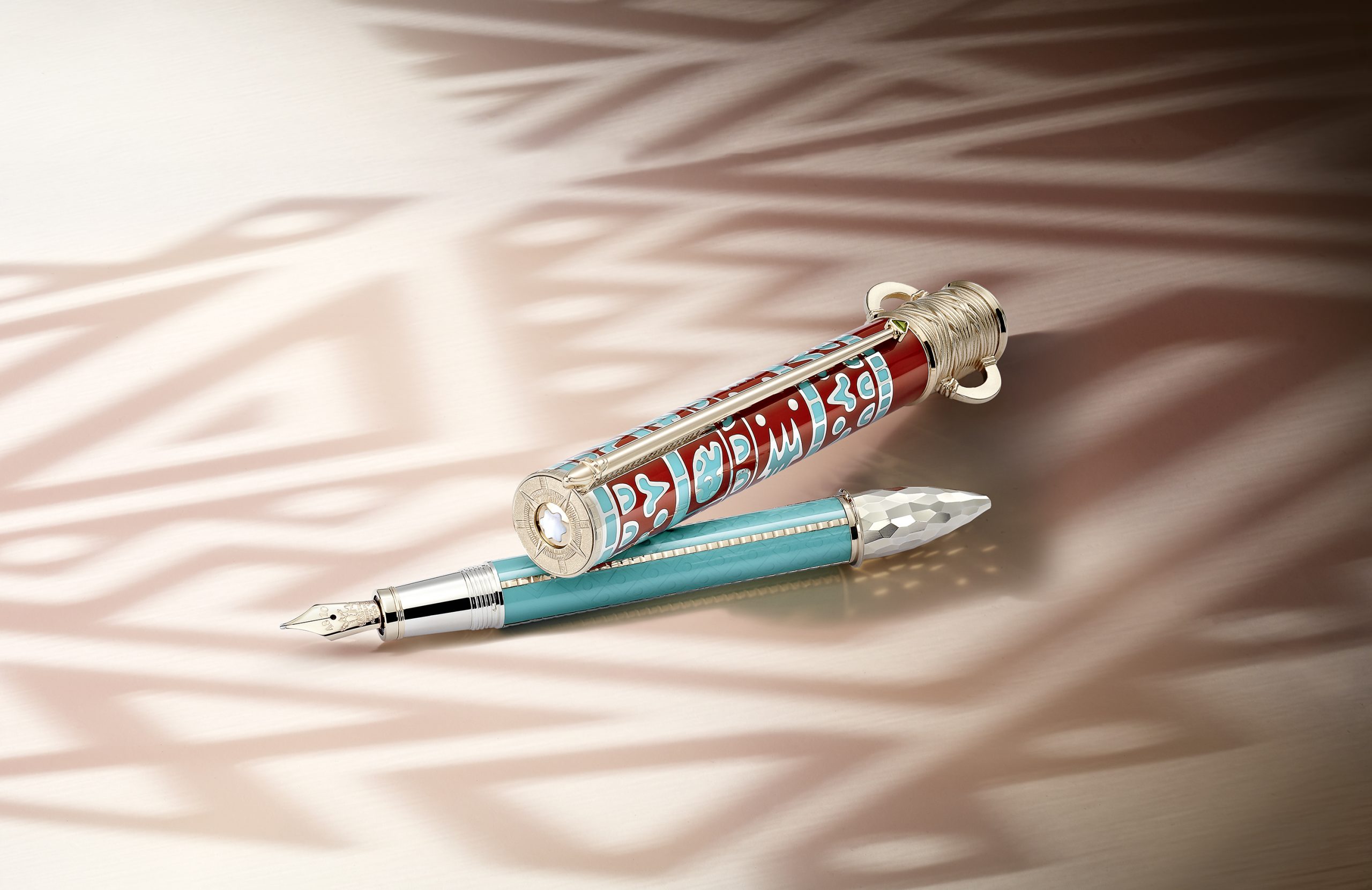 This vibrant edition is dressed in colours favoured in Aztec culture and used in royal garments. The engravings on the Ag 925 sterling silver cap represents Moctezuma’s weapons, skulls, and traditional Aztec’s ornaments. Its lacquered turquoise barrel is engraved with a pattern reminiscent of his cloak, a symbol of the king’s rank, and features four lines of Au 750 solid champagne-tone gold. In the 888 model, the cap is set with a triangular-cut green jade.

The forepart of the writing instrument and the cone with its distinctive hammering optic are crafted from Ag 926 sterling silver, which contrasts with the champagne-tone gold fittings and the handcrafted solid gold nib adorned with the Aztec glyph for Tenochtitlán. The Montblanc emblem on the cap top is made of mother-of-pearl, and embedded in the engraving of an Aztec sun disk honouring the ruler’s diverse architectural constructions and ornamentation in the cities of the Aztec empire.

Montblanc Patron of Art Homage to Moctezuma I Limited Edition 87 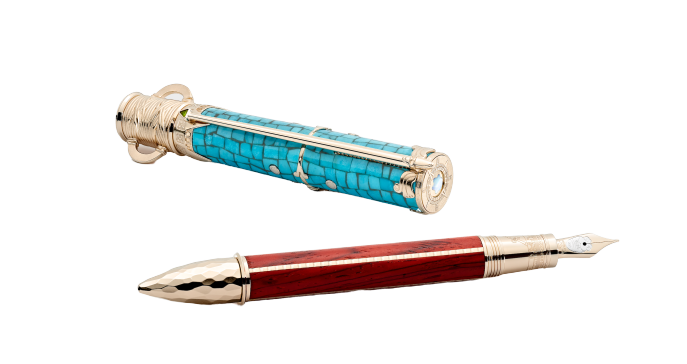 The 87 model is limited to just 87 pieces in homage to 1987, the year when the Templo Major reconstructed by Moctezuma was added to the UNESCO World Heritage list. It’s dressed in Aztec-style turquoise mosaic that’s handcrafted with an artistic sensibility that makes each of the 87 pieces slightly different. The mosaic is refined with solid champagne-tone gold inlays set with jade cabochons and a central Aztec motif symbolising the ‘five suns’ creation myth. The barrel is crafted from precious Central American cocobolo wood, referencing the material used to make the atlatl and to the famous El Sargento tree in Mexico City that was planted during the reign of Moctezuma I. Another homage to the Templo Mayor takes the form of four stepped solid gold bands embellishing the barrel. The handcrafted solid gold nib is adorned with a fine engraving inspired by the Aztec glyph for the heart, a symbol for sacrifice. Another glyph engraved on the forepart represents the second name of Moctezuma I: Ilhuicamina, which means ‘he who shoots an arrow into the sky’.

Montblanc Patron of Art Homage to Moctezuma I Limited Edition 8

This edition is limited to only 8 pieces, and is inspired by ‘the stone of Moctezuma I’, the only remaining piece of the great Templo Mayor excavated in 1988. The magnificence of Moctuzuma’s ascension to the throne is capture in the design of this rare edition, with a cap made of solid champagne-tone gold and an elongated shape set with diamonds, garnets, green tsavorites and multi-coloured sapphires.

This writing masterpiece is decorated with a hand-engraved winged Huitzilopochtli, patron god of the Aztecs. Three-dimensional engravings of the symbolic eagle and cactus represent the foundation myth of the Aztec capital, Tenochtitlán, while the two double-headed snakes that frame the artwork are Aztec symbols of renewal, fertility, and luck. The barrel of this edition references to the highly mythologised sacrificial rituals of the Aztecs. It’s made of dark red precious jasper and enriched with solid champagne-tone gold inlays. The cap top is crowned with a Montblanc Diamond embedded in an engraving inspired by the eight-rayed Aztec sun disc. 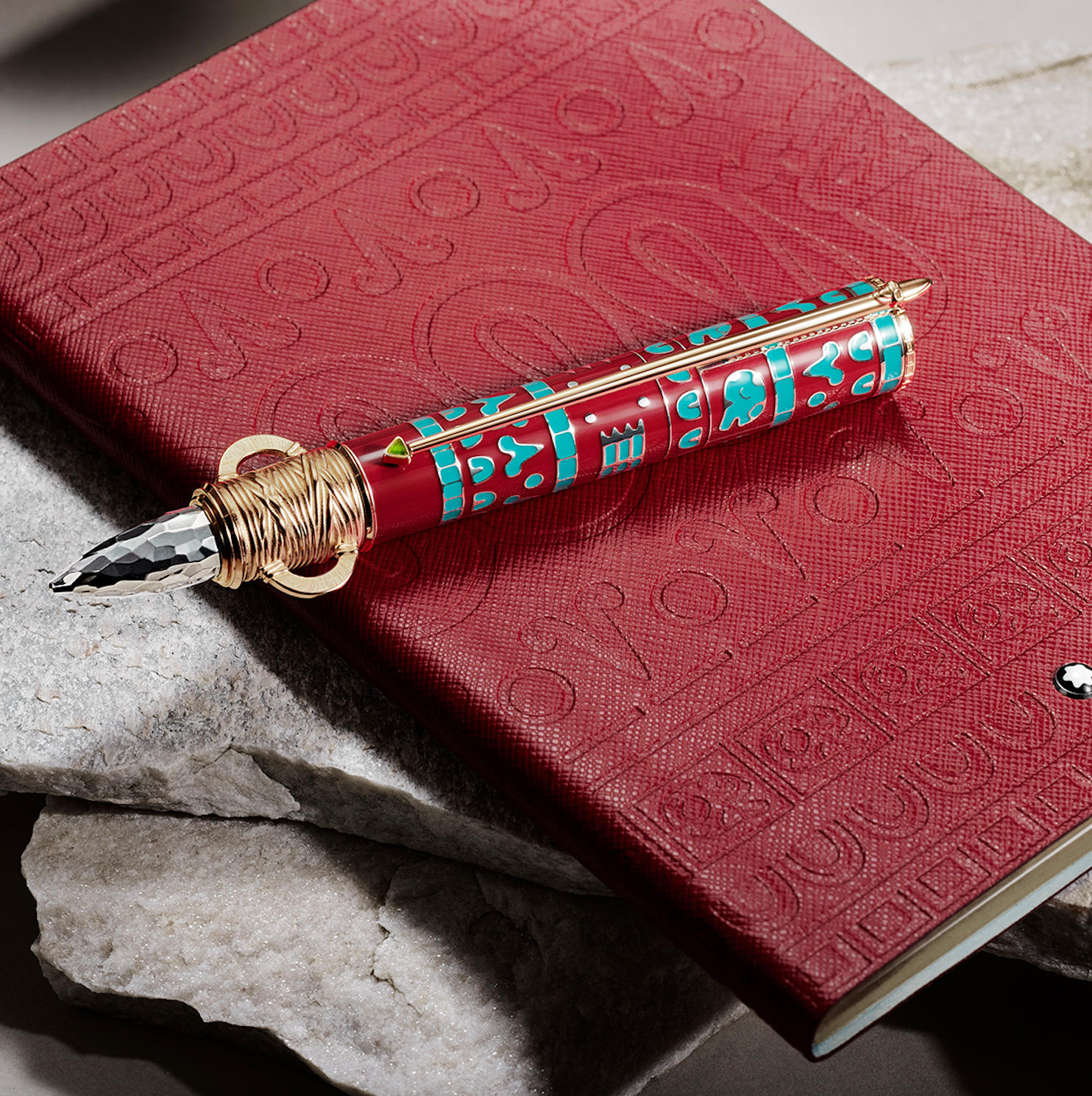 The release of the four Patron of Art homage to Moctezuma I Limited Editions will also be accompanied with a fine stationary notebook in red calfskin Saffiano leather embossed with traditional Aztec motifs, as well as a Homage to Moctezuma I ink in a bright turquoise inspired by the traditional jewels and cloths of Aztec emperors.

Discover this fine, vivid collection is all its glory via the Montblanc website here, with the collection price starting from RM12,160.

Female sexuality and her pleasure: Why is it still a hushed unmentionable? 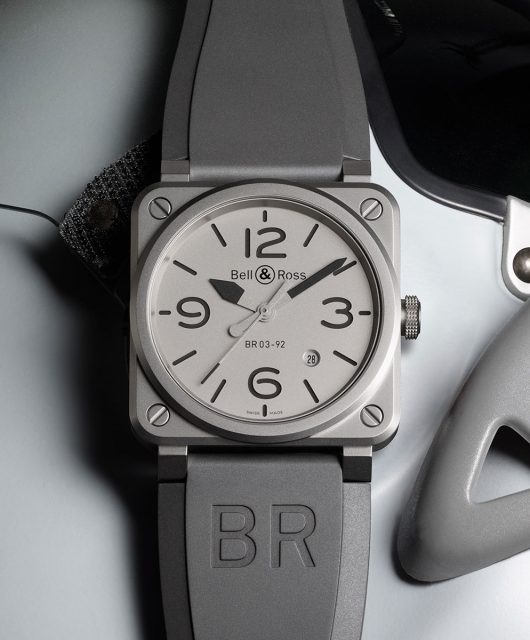 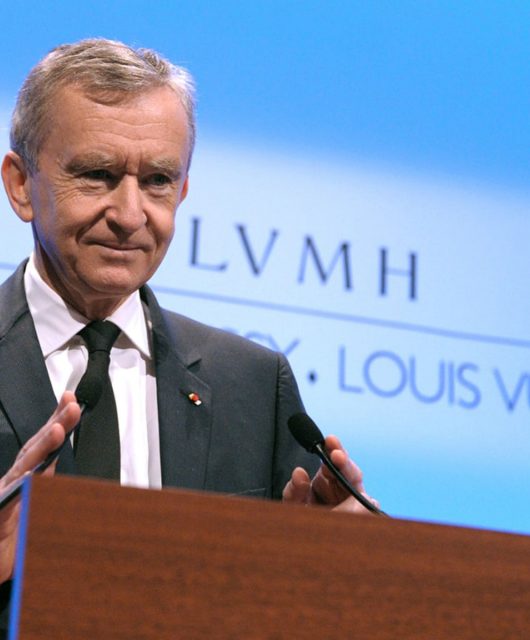 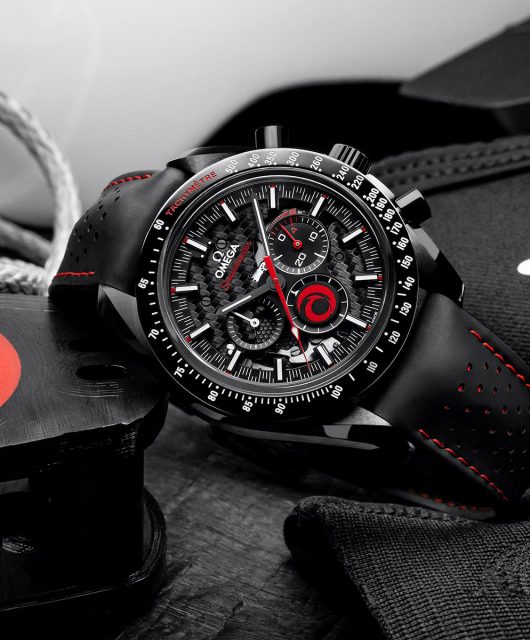 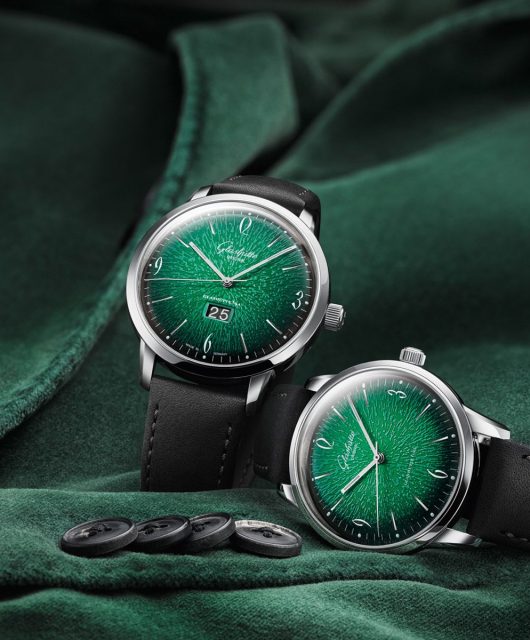 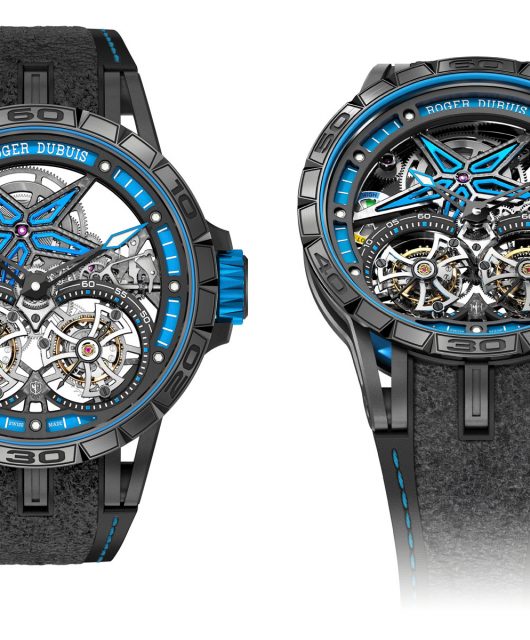