Bremont chose a very different route to premiere its latest releases for 2017 – bypassing Baselworld and hosting an event of its own.

Everyone in the world of horology – from makers to buyers – has their eyes set on one thing this time of year: Baselworld, which will be taking place on the 23rd of March, 2017.

There’s one brand that couldn’t care lesss though.

In an unprecedented move, British brand Bremont chose a very different route to premiere its latest releases for 2017. It did so in a private event of its own in a townhouse in the heart of London, flying in press, buyers and affiliates to a watch showcase of only all things Bremont so the focus remained only on its own lineup.

“We’ve done Basel in one form or another for basically a decade now, and it’s a model that works well for the Swiss watch brands, but that’s the thing—we’re not Swiss,” stated Bremont cofounder Nick English at the launch of the event. “Rather than getting lost in the masses of the show, we thought we’d take a gamble, and showcase our pieces on home soil, and in a more intimate environment.”

It was a good call as reporters and journalists were able to feast their eyes and full attention to quite a number of new watches sans distraction from other brands competing for their attention.

Dive watches have long been part of Bremont’s portfolio since its early days, with chronometers that were quickly adopted by the military and dive professionals alike. The Supermarine S500 and S2000 were both remarkable pieces of engineering inspired by Bremont’s core principles. Now meet the Type 300 and 301 – named after the 1930’s aircraft company Superfire’s first Spitfire prototype, the Type 300. They are smaller in iteration and a lot slimmer, being only 13mm from sapphire crystal to case back, featuring a uni-directional ceramic rotating bezel.

Bremont is going back to the roots of military aviation with the AIRCO – its first 40mm, classically-styled three-hand pilot watch. Not by coincidence, it also joins the lineup in 2017 as the Royal Air Force gears up to celebrate its centenary next year. Two new very simple models make up the collection – the AIRCO Mach 1 with an integrated dial ring and SuperLuminova coated numerals and markers and the AIRCO Mach 2 with similar integrated ring dial but comes with polished nickel numerals and hands.

Bremont is proud to announce that it will again be working with iconic motorcycle brand Notron Motorcycles as the team’s principal sponsor. For the occasion, it has created two very special Norton-inspired chronographs – the limited edition V4SS and V4RR. The V4SS boasts numerals inspired by those seen on the bike’s speedometer complemented by carbon fibre inserts and red-bordered chronograph counters while the V4RR comes with gold chronograph borders in a beautifully polished Trip-Tick three-piece case.

The ALTI-P gets refreshed, 10 years on

This year marks the 10th anniversary of one of Bremont’s first watches – the ALTI-P chronograph. For the milestone, the classic watch will be undergoing an evolution while still maintaining its timelessness. We’re looking at new dials and hands, a new case (although it remains 43mm in dimension) and for the first time, a cream coloured dial will be added to sit alongside the well-known and well-respected blue and black variants.

Following 3 successful years of working with America’s Cup Event Authority, Bremont is further developing its range of timepieces for the event with two new additions – the new Regatta AC II, designed to be highly legible while incredibly tough at sea, and the AC35, made in a very limited edition of 35 models, to commemorate this being the 35th America’s Cup.

The legend of the E-Type continues with new Jaguar MKII

Bremont has always saluted Jaguar’s Lightweight E-Type racer car with its E-Type collection of watches. This year, new updates coming to the range is a white-dialed counterpart with an all-new internal tachymeter dial ring which can be used to measure speed. It also features new hands and a red-stitched racing leather strap, a nod to the red stripes which adorned the car.

The Solo 32 gets two new variants

The wildly successful Solo 32 ladies range launched in 2016 also has new additions, this time in beautiful rose gold. One falls in the AJ line and the other in the LC line. The AJ line is still based very much on the 32mm models released in 2016 but now boasts more modern applied index markers. The LC, on the other hand, gets more timeless roman numerals, beautifully offset against a new black dial.

Get first look at all these piece coming soon exclusively at Swiss Watch Gallery. 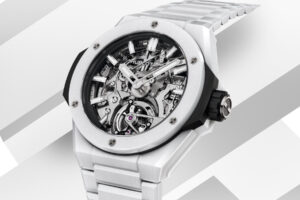