They come for the first time in a titanium case – a material chosen for its particular lightness and resistance to salty ocean air.

To understand why Breguet’s La Marine collection means so much to the brand, one needs to look back to the story of its founder, Abraham-Louis Breguet.

As a watchmaker, Breguet loved all fields of horology, but it was marine chronometry that particularly struck his interest. This came as a useful passion as it was the early 1800s, a time when Europe was on a rapid conquest of the seas surrounding it. The exceptional quality of Breguet’s marine chronometres caught the eyes of King Louis XVII of France in 1815, so much so that he appointed Breguet the official Chronometre-maker to the French Royal Navy.

Not only did Breguet’s maritime pieces take on the seas, it led the way through the poles of the world too. In 1840, a Breguet instrument was the first timepiece to reach the Antarctic, guiding to safety the Jules Dumont d’Urville expedition.

The original La Marine was created as a tribute to these feats, combining elegance and sportiness with an authentic invitation to travel, explore and discover.

In the last two years, it’s gotten four new models that reinterpret Breguet’s aesthetic codes while integreting the latest innovations in haute horology. They also come for the first time in a titanium case – a material chosen for its particular lightness and resistance to salty ocean air – framing a sunburst slate grey dial.

Here’s a closer look at the four. 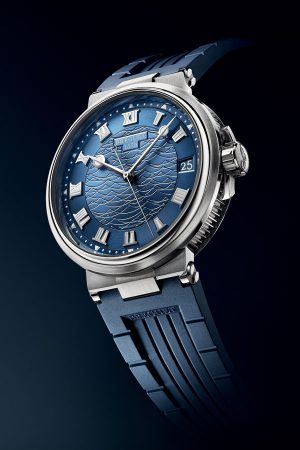 This sport luxury watch sees Breguet breaking out from the conservative rigidity of its signature style. Maritime details are aplenty from the signal flag correspondence on the counterweight of the seconds hand to the beautiful guilloche waves on the dial that glimmers in the wake of light like the real waves of the sea.The five minute markings on the hours chapter also take the form of luminescent nautical pennants. It runs on a mechanical self-winding movement with a 55-hour power reserve, all housed in a 40mm case with fluted caseband, screw-locked crown and a sapphire-crystal back. You can choose from titanium with sunburst slate grey dial, gold, rose gold with silvered gold dial or white gold with blue dial in gold. They are available with a leather or rubber strap and are water-resistant to 100m. 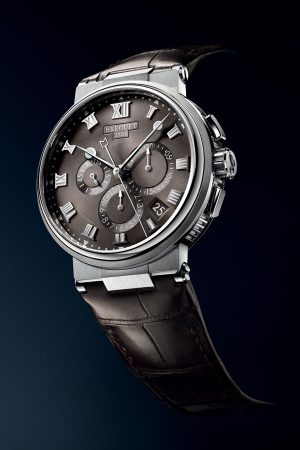 With this chronograph, Breguet borrows inspiration from its chronographs of old with a dial that throws things off with an assymmetrical sub-dial positioning. They cluster at the bottom, leans a little heavier to the right and are of different radial sizes. They also overlap for a break in uniformity that’s quite refreshing. Turn the watch over and you’ll notice a unique caseback decoration that reveals its movement – its oscillating weight resembles a boat’s tiller, another nod to the maritime theme of the collection. At 42.3mm, it is quite a sizeable watch, also with the same fluted caseband, and is available in titanium with sunburst slate grey dial in gold, rose gold with silvered gold dial or white gold with blue dial in gold. 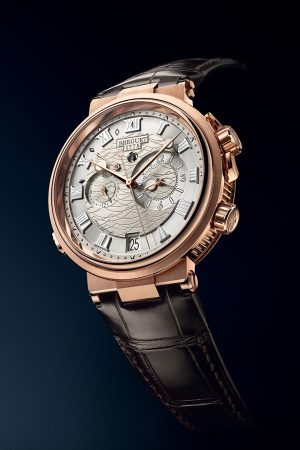 As its name suggests, it is an alarm watch that operates on a two-barrel alarm movement, with both barrels capable of being simultaneously wound by means of the crown or the unidirectional automatic mechanism. The first barrel powers the time indication and the other powers the alarm mechanism. What’s practical is that the alarm can be stopped and restarted in the midst of a ring thanks to a smart mechanism driven by a column wheel. You’ll notice it has three crowns – the 2 o’clock winds the watch to set date and time, the 4 o’clock sets the second time zone and alarm time, and the 7 o’clock activates and deactivates the alarm. When the alarm goes off, a small ship’s bell appears in the window at 12 o’clock. It is available in titanium with sunburst slate grey dial in gold, rose gold with silvered gold dial or white gold with blue dial in gold. 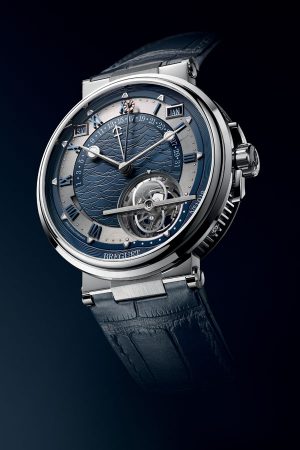 When this was first premiered in 2017, it was such big news that many deemed it Breguet’s new flagship model. It’s a large watch and, more importantly, it is by far the most complicated timepiece in the Marine collection, being a complete calendar and tourbillon in one. The star aspect is, without a doubt, the tourbillon in the lower right-hand corner – it has an equation hand that runs along with the minute hand, a feat made possible through the use of a differential system of gears. The input to the differential system, in this case, is via a lever with a ruby pin on its tip that runs along the inside of the kidney-shaped cam of the tourbillon. This model is not available in titanium for those who are hopeful, only platinum with blue dial in gold or rose gold with silvered gold dial. 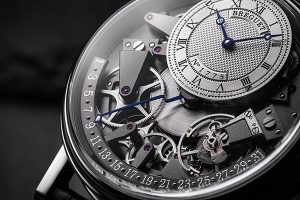 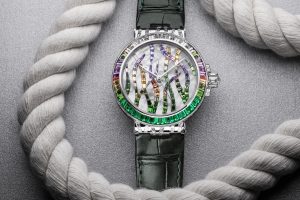 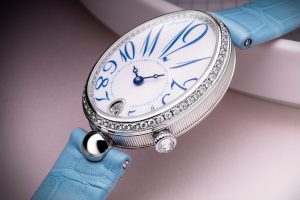 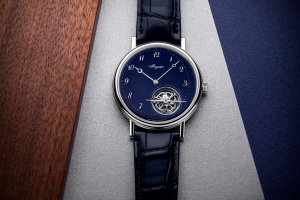 The Breguet Classique 5367 timepiece gets an enamelled touch for 2020