Once a taboo culture associated with gangsters, the lion dance has evolved over decades to become a celebrated sport participated by troupes all over the world.

In a quiet industrial warehouse in Kampung Subang, a lion stirs.

A steady beat of drums rouses it further and, deftly, it hops onto the first of a row of tall poles, front legs first then hind legs neatly behind. It prances in an organised series of steps as if floating on air, following the rhythm of the aforementioned drum.

Every Wednesday, Eric Fong watches over the lion to ensure it gets its steps right. He observes intently and, at intervals, shouts commands to correct a misstep here, a missed drum beat there.

The lion is made up of two of his best wu si zai, or lion dance boys, the last of the few remaining in the country. Under the heavy lion head and the colourful cape of its tail, the two boys work in sync performing acrobatic feats to mimic the movement of a four-legged beast as regal as it is historically and culturally rich. 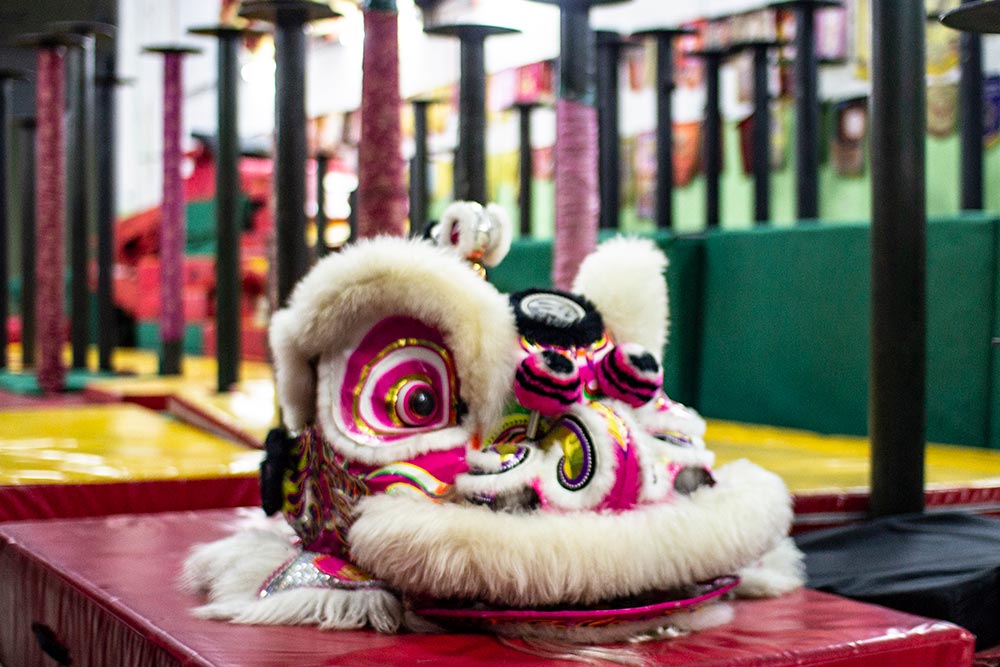 “The tail needs to be smart,” Eric tells, referring to the taller, more muscular boy at the back. “He needs to be fast-thinking to set the pace, strong enough to lift the head –” in reference to the boy in front who controls the lion head, “- and fluid enough to move his behind to mimic the lion’s wagging tail.”

The lion rears its head from its place on the pole six to seven feet above the ground.

“The head needs to be agile,” Eric adds. “He needs to be able to jump high, and most importantly, he needs to be a positive thinker. He needs to believe he can make the furthest and tallest jump, while relying on the tail to always hold on to him from falling.”

As the troupe leader of the Khuan Loke Lion & Dragon Dance Association, Eric has been involved in the lion dance scene for 27 years, since he was a boy of 12. He has seen it evolve from an activity that is looked down upon, to a celebrated competitive sport that is participated by troupes all over the world. It is hard, unpaid work but it is something he calls his sen ming gan – or his spirit of life.

The lion dance has survived decades of stigma to progress to where it is today. On top of the glamourous performances with colourful uniforms and lively music that never fail to wow crowds and turn heads, it is now also a recognised sport that has its own foundation and championships with invigilators and set scoring systems.

Eric remembers all too well the days when it was a taboo culture and lion dancers were all deemed gangsters due to their unkempt appearance. They used to favour a uniform of dirty white wife-beaters with cigarette boxes tucked under the shoulder and a lit cigarette hanging from their lips.

“My friends’ mothers used to warn me to stay away from their sons in school,” he laughs. “They didn’t want their sons hanging around me because I was a wu si zai.”

Quite the contrary to its reputation as a subculture of gangsters, the lion dance is actually a performance art that is bound with rules.

“Traditionally, lion dancing is all about manners,” Eric shares. “There are rules for the lion and as dancers, we are constantly tested by the elders to see if we know them.” 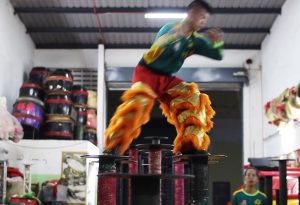 Anything blue, from a piece of cloth to a plastic stool, represents water. Upon seeing it, the lion needs to test it out by “licking” it to ensure there are no spells before it can pass. If it is presented with wood, be it a plank or block or even chips of it, it needs to scratch at it with its talons to sharpen its claws.

There are also more complicated tests, such as the arrangement of a spear on the ground with two oranges at the tip, as is the tradition of wushu clans to protect their homes. This represents a snake and the lion will need to know how to disperse it to break the spell.

“But be careful,” Eric cautions. “If you see a stick of bamboo with leaves and also two oranges arranged at the tip, that is not a snake. That is a dragon, and it is good luck. You need to pay respects to it to welcome auspiciousness.”

The only thing the lion is afraid of is the colour red, symbolic of fire.

“When there is red, there is fire, and we usher in the Big Head Buddha who will come with his fan to put out the fire,” Eric tells.

These days, all that remains of these rules is the “eating” of green lettuce, symbolic of abundance because it is simpler for hosts to prepare to welcome the lion.

“Yet, for some reason, as much as it is afraid of the colour red, it welcomes angpaus,” Eric jokes, shaking his head at the irony of changing times. 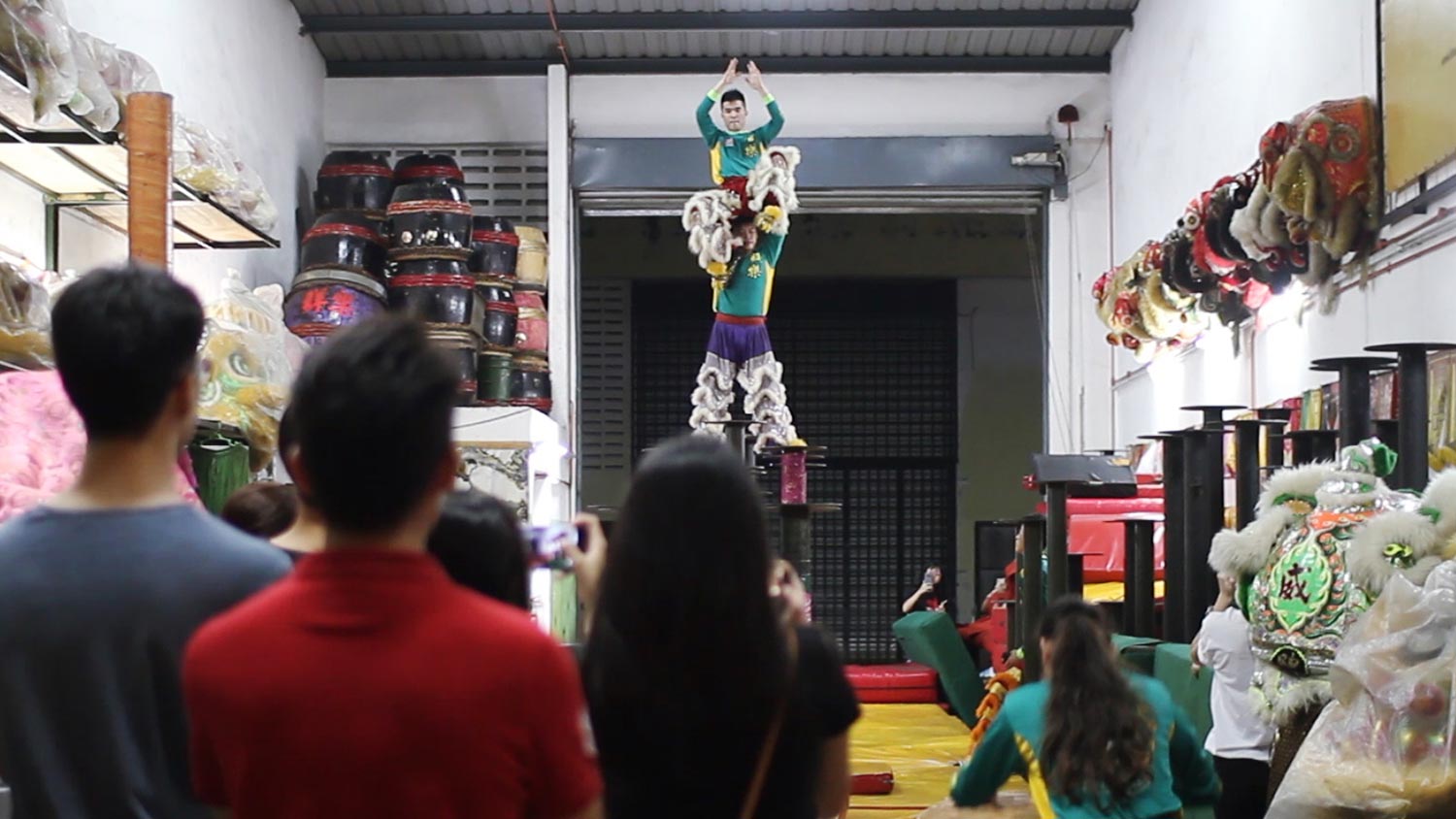 These days, it isn’t just the knowledge of the rituals that is dwindling. It is also getting harder to find new blood that wants to pick up the sport.

“It’s a dying culture,” Eric says with a hint of sadness. “It’s nice to see, but hard to train for. This is something that needs to be done consistently. If you stop, your muscles forget how to do it. You must keep things warm all the time.”

Khuan Loke’s troupe trains three times a week in the months of January to March when paid performances are at its peak due to the Chinese New Year season. This is also about the only period for them to make the money needed to run the club.

“Traditionally, lion dancing is all about manners.”

It takes approximately RM1 million a year to sustain the association, from renting the warehouse that serves as the headquarters where they train to maintaining the three-tonne truck used to transport the troupe to and fro performances and buying lion heads and uniforms.

“We also order 200-300 pieces of uniform a year, which cost RM12-16K each time,” he adds. “You need to change every every year as you need look fresh during competition.”

In the months of April to December are when competitions become the focus. There is one held almost every month, locally and internationally. During these periods, the Khuan Loke troupe trains daily.

“We train every night during competition season,” Eric tells. “And the coaches and trainers all do it out of passion.”

Training is often held at night, dinner time to past 10pm, as most coaches and lion dancers have their own day jobs.

“We do it largely to preserve this tradition and hopefully be able to pass down the art to the new generation,” says Eric. “Most of us started doing this in secondary school when we were very young, it’s a hobby we love.” 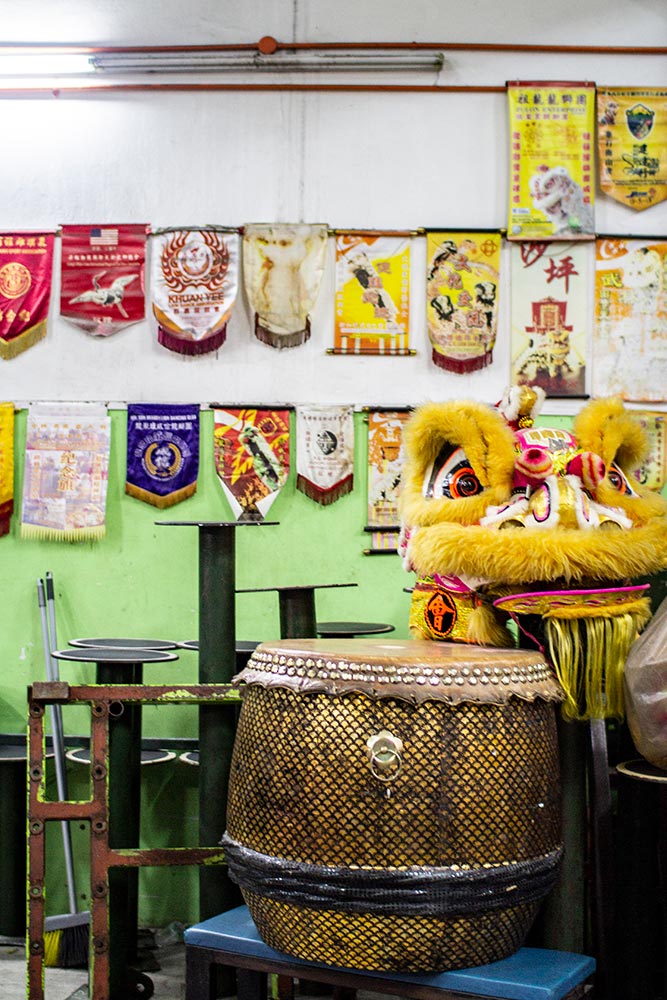 One in Five Rate of Success

For an idea of what it takes to produce a championship worthy troupe, wu si zai are recruited from ages 12-13, although interested parties of up to age 25 are always welcomed.

Back in Eric’s days circa the 1990s, your first three months are spent just learning how to do the kung fu squat. This is the squat you’re required to hold throughout the performance if you’re playing the drums or cymbals. Once you’ve perfected the stance, only then do you proceed to actually play the instruments.

You learn drums and symbols alongside groundwork dance with the lion head as everything is interconnected. The drummer sets the beat to which the lion dances, and the lion signals the drummers when they are ready to take things up a notch to a faster pace, or wind down to a slower one. Dancers often rotate lion dancing and drum-playing so both routines stay fresh in their muscle and brain memory.

“Anything that involves music will attract people regardless of race – Malay, Indian and Chinese will all be attracted and unite.”

“Beginners dance on the ground, jump onto table tops and learn tricks like flipping chairs and hopping on and off stools,” Eric shares. “ They’re also taught how to most accurately depict a playful or shy lion.”

“After a year or two, we pick the best of the best to take on the high poles.”

The high pole event is the grandmaster of lion dancing, the most revered of all competitions and the most respected of entire lion dance repertoire. Of ten students making five pairs, perhaps only one pair will be promising. That is a one-in-five possible rate of success after years of training and investment.

This is because talent aside, there is the issue of support in making them happen.

“Some parents don’t want their children participating in the high poles as accidents do happen,” Eric says. “Falls happen and the injuries are not light.”

He quickly assures us that each of this troupe members is insured, with premiums paid for by the association. 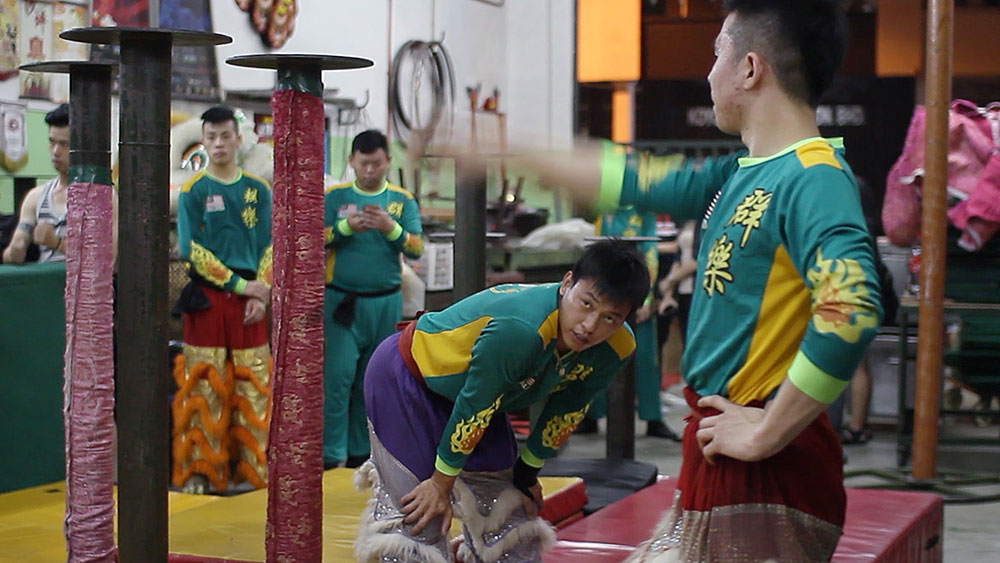 Despite it all, Eric remains hopeful about the future of lion dance.

“As with everything, you’ll definitely meet difficulties,” he sages, “We need to learn how to overcome these problems when we meet them and not let the culture die. We must work hard to keep it alive.”

He sees it as a great unifying factor: “Anything that involves music will attract people regardless of race – Malay, Indian and Chinese will all be attracted and unite.” 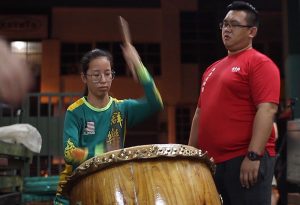 He is already seeing it with his troupe, which is proud to consist of Chinese, Indian, Japanese and even Indian Muslim members.

Two of his disciples are also female, playing the drums and taking on the poles as strong and sure as their male troupe members.

Hardwork, unfortunately, may not be enough to sustain the art. The country currently only has on record less than 50 active lion dance troupes that are registered and fit for competition. Back in the day, the numbers soar above the hundreds.

In a quiet industrial warehouse in Kampung Subang, a lion stops short on the edge of  a row of poles, surveys the ground below it, and does a swift somersault down. In the process, its cape and head fall off, revealing two red-faced boys, arms glistening with sweat and faces split into wide grins as they nail their landing, the last of the few remaining wu si zai in the country. 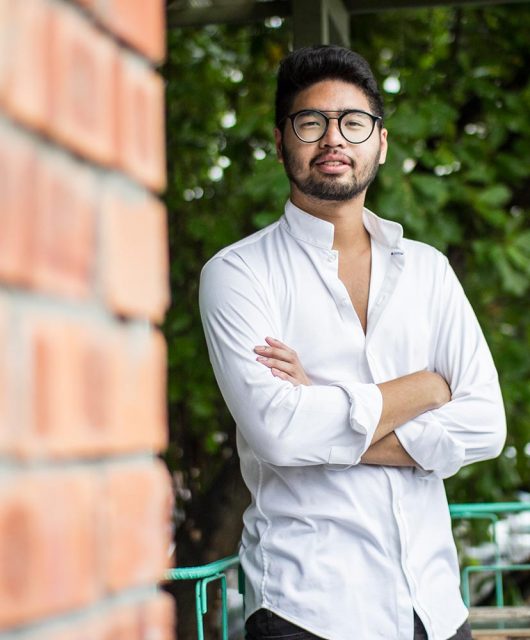 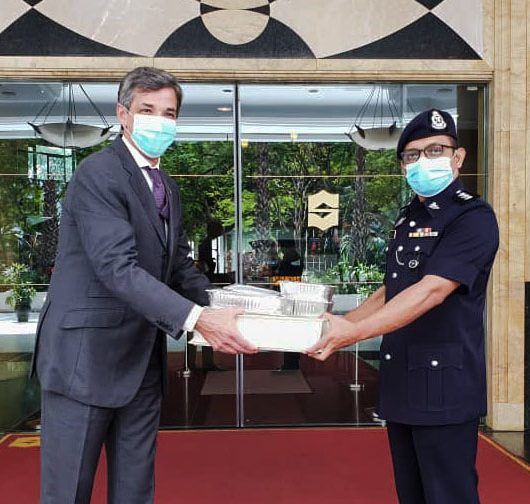 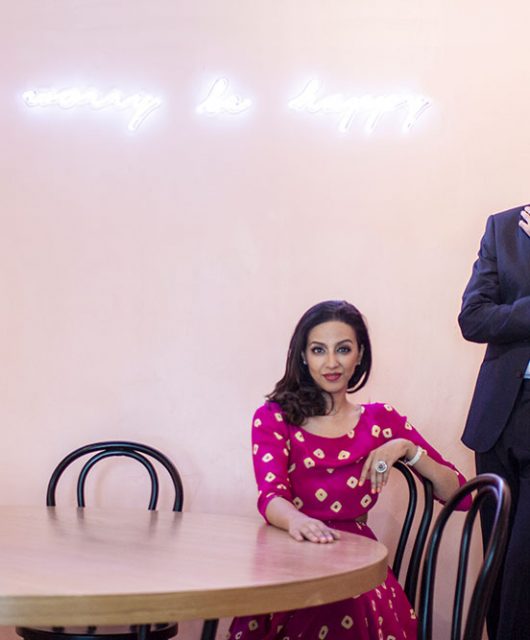 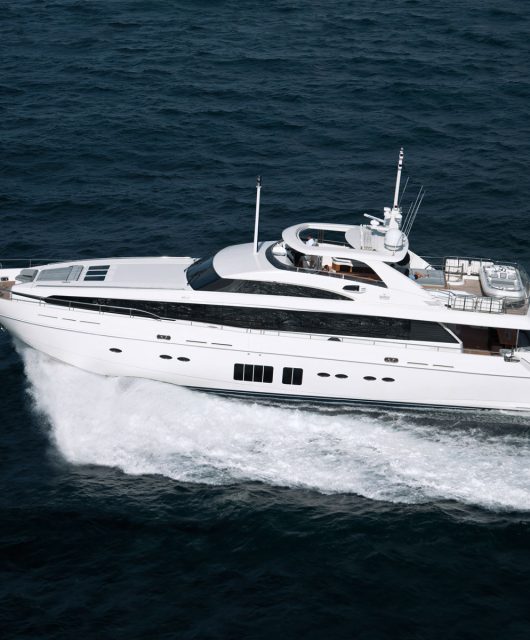 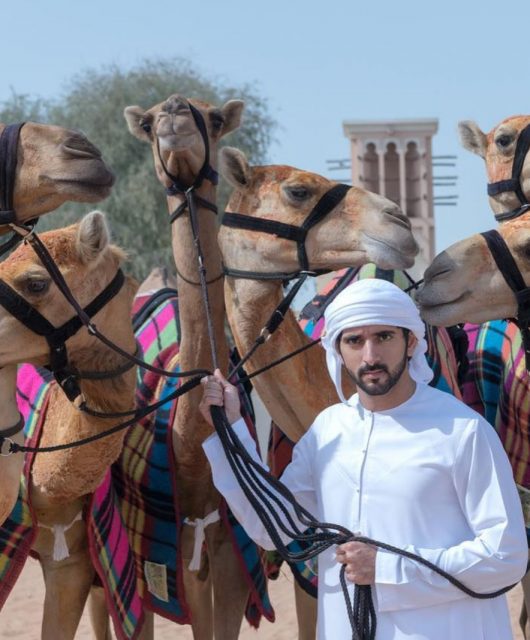