One thing worth noting about the new model is that the bezel is formed from one block, with no overhang or breaks in the plane.

Many watchmakers seem to be looking back into its archives for next year’s SIHH and Cartier is the same, shining the spotlight on one of its oldest wristwatches, the Tonneau.

Revealed in 1906, just two years after the Santos in 1904, it was considered an oddity at the time of its premiere thanks to how it challenged the round pocket watches of its time. True to Cartier’s spirit of innovation, it came to own its unique oblong curved shape and seal its place in the hearts of watchlovers to become the precursor of modern watches.

Pink gold or platinum make for the brackets of the 2019 version, crafted into the legendary shape that follows the contour of the wrist. Roman numerals tell the time loud and clear while a railtrack, a cabochon on the windng crown, leather strap, screws on the lugs complete the codes of Cartier watchmaking. It stays true to the 1906 model, despite having been reworked to fulfill modern day demands such as water-resistance.

One thing worth noting about this model is that the bezel is formed from one block, with no overhang or breaks in the plane for contours and lugs that melt into the watch case. The numerals are rhodium-plated and polished to stand out against the dial background (champagne-coloured on the pink gold version, silvered on the platinum model), and each model is limited to only 100 pieces, all fitted with the new 1917 MC Manufacture calibre.

There’s no fun in just bringing back an old model. Cartier elevates it with the premiere of the new Skeleton Dual Time Tonneau which is a tribute to the Tonneau XL dual time zone model in the orginal COCO calloction.

Initally consisting of two separate mechanisms for the home time and the second time zone, Cartier has found a way to incorporate the exact characteristics into one, adapting them to the initial shape without altering it. 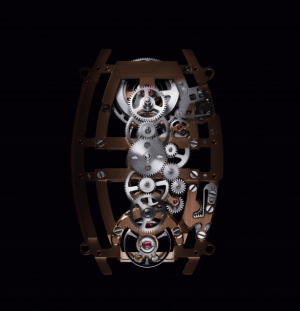 To do this, two challenges had to be overcome: to retain the watchcase’s elongated form, all the wheel of the geartrain are aligned between the 12 and 6 o’clock. Then the shape of the movement underwent modification, being made to curve so it fits within the curved contours of the Tonneau watchcase. The geartrain features angled cutting on its barrel and escapement wheel.

This concern for comfort and ergonomic design required a feat of watchmaking prowess in ensuring the watch follows the curve of the wrist. Lastly, in the pursuit of aesthetics, the two time zones were linked to create an impressive display combining the useful with the pleasurable: the time is easy to read on the skeleton bridges, and the second time zone is set by pressing on the crown at 4 o’clock and by one-hour jumps. Cartier adds its own watchmaking signature by skeletonising the movement, bringing lightness and nobility to a traditional complication: a demonstration of how to perfectly balance form and function, case and movement.

The pink gold and platinum versions come in limited, numbered editions of 100 pieces, while 20 numbered pieces are available in the baguette-cut diamond-set platinum series.