Out of all the iconic perfumes in the world, none has a reputation such as Chanel N°5. Distinguished by its signature floral blend with essence of jasmine at the lead, it’s a unique perfume realised by Gabrielle Chanel and Ernest Beaux, and a fragrance that’s synonymous with luxury, femininity, and sensuality. It has graced vanities all over the world since its creation in 1921, and continues to uphold its status as an indisputable classic in perfumery.

This year, we celebrate the 100th year of the iconic fragrance, and we’re taking a walk back in time to re-discover ten facts about Chanel N°5 and how it became a perfume for the ages.

1. It was inspired by “the modern woman” 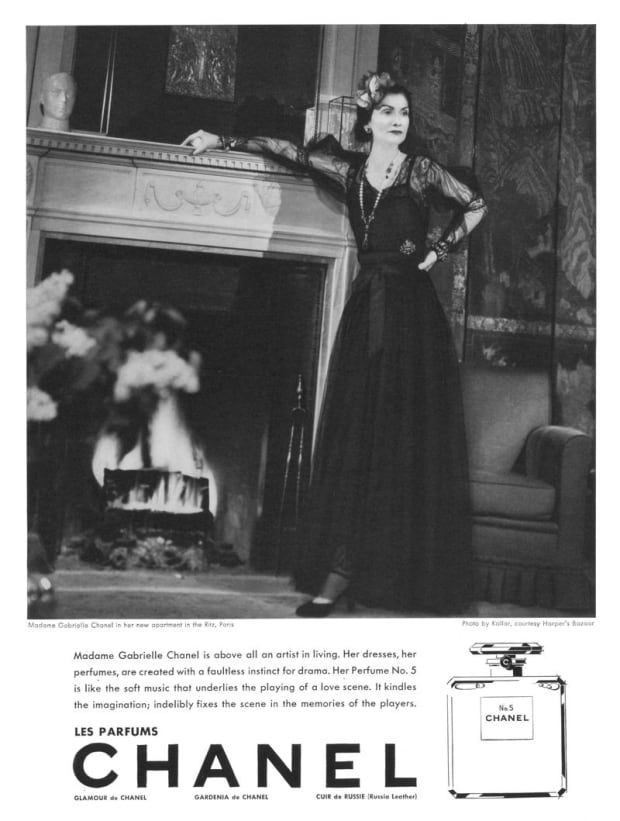 Gabrielle Chanel created Chanel N°5 as a fragrance that transcends time and trends. To help produce the fragrance of tomorrow, she enlisted the help of Ernest Beaux, the French-Russian master perfumer to the tsars, to create “a woman’s perfume with a woman’s scent.” She wanted a truly one-of-a-kind scent that could capture the complexity and sensuality of the modern woman – especially one that could be worn by a woman on wherever she wanted to be kissed.

2. The significance of the number 5

The number 5 was chosen as the name of the fragrance because out of all the samples Ernest Beaux presented to Mademoiselle Chanel, she preferred the fifth sample the most. It was also a bold move on her part to name a fragrance with a number, as trendy perfumes of the time bore romantic names. She also chose the number because of its magical, luck-giving qualities.

3. The perfume strays away from single-flower fragrances

Ernest Beaux travelled far and wide, even reaching the Arctic circle, in search of components that would make up the iconic perfume. He veered away from the traditional methods of using a single flower as the heart of the perfume, and instead combined over 80 ingredients – including jasmine, mayrose, ylang ylang, hyacinth, orange blossom, sandalwood, and Brazilian tonka beans – to create the extravagant N°5 scent that we know and love today.

Before Chanel N°5 starred in grand advertisements and commercials, Gabrielle Chanel’s debut marketing strategy for the perfume involved dining with a group of elite friends at a restaurant on the French Riviera, and then surprising her friends by spraying them with the fragrance.

5. It takes one tonne of flowers to distill 1.5 kg of the perfume’s base

Chanel N°5 includes the essences of flowers such as ylang ylang from Madagascar and Mayotte, jasmine from Grasse, and the mayrose flower which only blooms for three weeks a year. It takes one tonne of flowers just to create 1.5 kilograms of “absolute”, the highly aromatic, concentrated oil that’s used in perfumery.

6. American soldiers waited in droves to buy Chanel No°5 when WWII ended 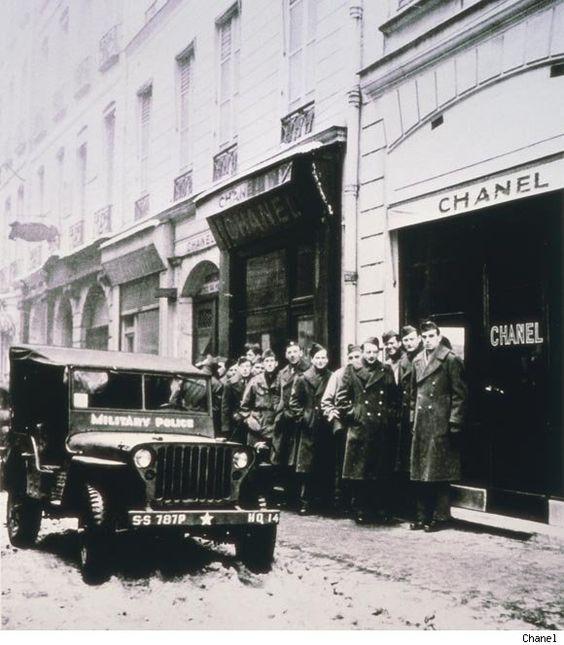 At the Liberation of Paris in the summer of 1944, American GI’s flocked to the Chanel store in Rue Cambon to purchase Chanel N°5 to bring home to their awaiting wives and fianceés.

7. It is the first perfume to use aldehydes

Ernest Beaux was also the first perfumer to introduce aldehydes, a synthetic component that exalts each note of the perfume. Aldehydes enhance the scents and add layers of complexity to the final product, instilling the charming mystery of the perfume that’s impossible to decipher.

8. The most expensive ad ever

In 2004, Baz Luhrmann directed a 180-second short film for the perfume called No. 5 the Film. It stars Nicole Kidman and Rodrigo Santoro placed in a romantic setting reminiscent of Luhrmann’s Moulin Rouge movie, which also starred Kidman. It’s known as the most expensive TV advertisement of its time, costing up to US$33 million to produce. 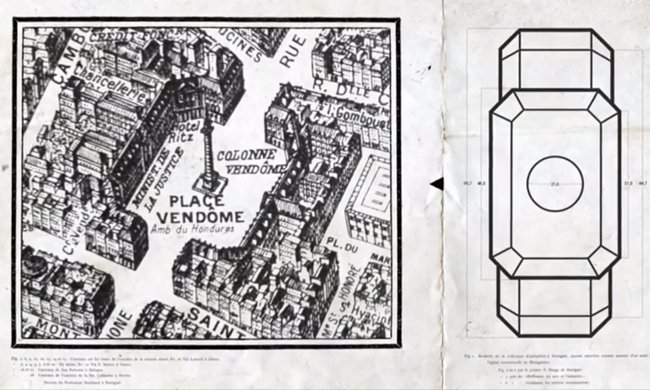 The Chanel N°5 bottle sports a simple laboratory flacon design that’s pure, elegant, austere, and bare as a vial – contributing to its elegant appearance. Its minimal lines set it apart from the other elaborate, mannered bottles at the time. Its diamond-cut stopper is also said to have been inspired by the geometry of Place Vendôme in Paris.

10. The first feminine fragrance with a man’s face 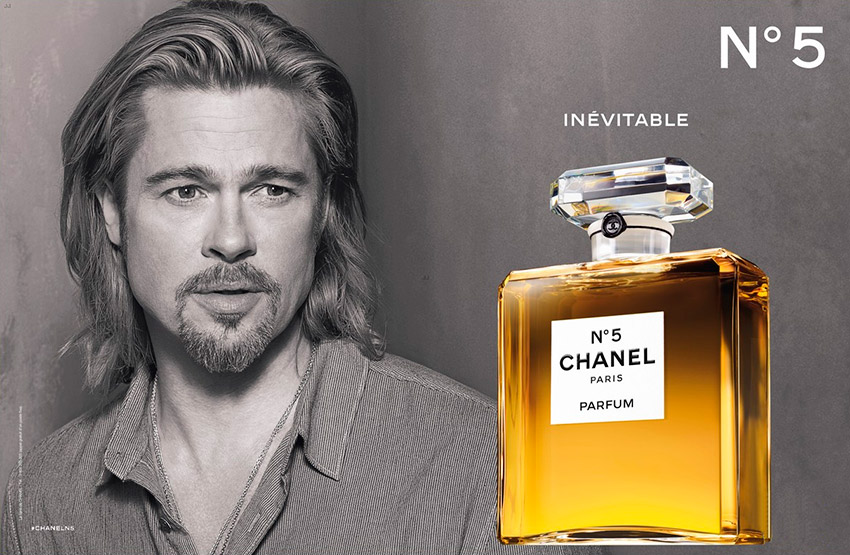 Keeping up with its unconventional spirit, Chanel made Brad Pitt the first male spokesperson for Chanel N°5. The actor is featured in a black-and-white film campaign directed by filmmaker Joe Wright, reciting a profound script.

In celebration of 100 years of the iconic perfume, Chanel unveiled a new film campaign starring Marion Cotillard and Étoile dancer Jérémie Bélingard. Directed by Johan Renck, the duo is taken from Paris to the moon, frolicking and dancing on the latter’s golden, glittering surface before returning to the Seine. It tells a “joyful love story” that celebrates both the heavens and the Earth, a feeling that’s tied to the sensation of wearing and experiencing the timeless fragrance. Watch the video below: 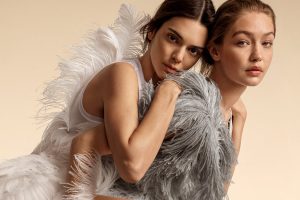 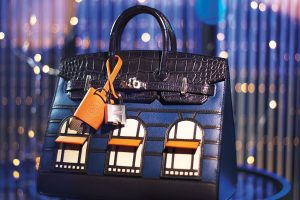 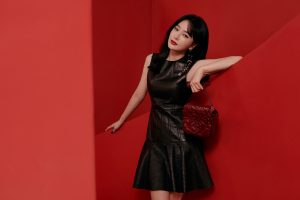