Just a few days ago, HBO’s The White Lotus wrapped up its last episode for its second season. The dark comedy-drama series, starring well-loved Hollywood actors like Theo James, and Jennifer Coolidge, talks about the lives of employees and guests at the fictional White Lotus hotel.

Unlike its first season which was shot in Hawaii, the second anthology takes place on the Italian island of Sicily, where the supposedly “fictional” hotel is not as made up as you may think. Along with other parts of the Sicilian city, here’s where you can go for a ‘White Lotus’ holiday.

Owned by Four Seasons, the San Domenico Palace is housed in a 14th-century convent atop mountainous rocks. Its heightened location provides guests with breathtaking views of the surrounding Ionian Sea, the ancient Greek theatre of Teatro Antico alongside Mount Etna on Sicily’s eastern coast. Opened in 1896, the hotel has hosted famous celebrities like Audrey Hepburn, Princess Margaret, Elizabeth Taylor and more before it was bought over by Four Seasons in 2020 and underwent a multimillion-dollar renovation.

The luxury hotel features 111 rooms, suites, and specialty suites, with prices ranging from $800 and up. San Domenico Palace also has three restaurants, two bars, an infinity pool, and a well-equipped gym for its guests to explore. Carefully curated experiences around the hotel like wine tasting and Mount Etna hikes are also available for visitors looking to traverse around the area. Although the hotel where most of the series’ scenes were shot is currently closed, it’s set to reopen on 14 March 2023.

For more information and to book, visit Four Seasons.

In a particular scene, the Di Grasso family takes a trip to Castello degli Schiavi, located just 30 minutes from Taormina. Its Sicilian baroque-styled facade is tainted with century-old grimes that blends with its rich history and tales. The castle is believed to be built in the 1700s and is known for appearing in parts one and two of The Godfather movies. Castello degli Schiavi which translates to Castle of the Slaves is currently privately owned, though the space is open for private tours done by the owner himself.

For more information and to book, visit Trip Advisor.

The Noto Cathedral also made an appearance in The White Lotus, when Daphne and Harper went on a little girls’ trip. Built in the 18th century, the Roman Catholic cathedral features classic Sicilian baroque architecture above expansive flights of stairs. Though the cathedral experienced a collapse in 1996, it was later reconstructed and reopened in 2007. Since then, it has been awarded a UNESCO heritage site and became a must-visit attraction in the Sicilian city of Italy.

After their girls’ trip, Daphne and Harper then went on to stay at a palazzo, which is actually the Villa Tasca in Palermo. The privately-owned property is surrounded by lush greenery, citrus orchards and stone pathways that line the 20-acre park. The picturesque building can likely be viewed from afar but is also open for events or wedding bookings.

For more information and to book, visit Villa Tasca. 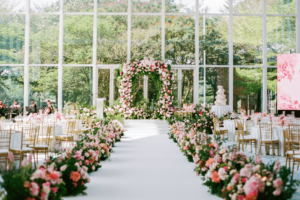