Love it or loathe it, no one can deny that HBO’s Euphoria has managed to gain an outrageous amount of buzz in a remarkably short span of time. Despite a relatively quiet debut in 2019, and a long pandemic-induced break in filming, the series all but blew up when its second season launched on HBO Max in the beginning of 2022.

The show, which presents either a provocatively realistic, or a gratuitously exaggerated, look at the experiences of today’s American high schoolers, quickly became HBO’s second-most watched show in 18 years, only behind Game of Thrones. Perhaps even more relevant is the fact that Euphoria has so far been the most-tweeted about TV show of this decade.

Euphoria’s stylised, technicolour cinematography, together with its characters’ Y2K-inspired fashion and makeup, have in many ways come to embody the current Gen Z aesthetic. Meanwhile, its actors have become forces within the fashion industry in their own right, collectively obtaining coveted ambassadorships and partnerships with luxury brands who are eager to tap into the generational moment they so unambiguously represent.

Just last week, Tory Burch announced that Sydney Sweeney, who plays Cassie in the series, would be its newest brand ambassador. In the statement, Burch had nothing but glowing praise for the actress, citing her talent, curiosity, confidence, and empowered approach to her work.

Earlier this month, Sweeney was also tapped to be South Korean skincare brand Laneige’s first U.S. celebrity partner, serving as the face of its newly revamped Water Bank Collection. Back in 2020, she joined Savage x Fenty’s star-studded roster of celebrity ambassadors, making waves online with her initial photoshoot for the Rihanna-owned lingerie brand.

Former Disney Channel star and Spiderman franchise actress Zendaya has in recent years become a darling of the fashion world, in addition to the big and small screen. Having already built a well-established career and body of work prior to her role as Rue on Euphoria, the star has over the years caught the eye of a number of high-end luxury brands. Recognised for her impeccable fashion instinct and statuesque model looks, the actress has naturally racked up an impressive set of brand partnerships.

In late 2020, Zendaya became Valentino’s newest face, with creative director Pierpaolo Piccioli stating that she perfectly embodies what the House today stands for, as “a powerful and fierce young woman that uses her talent and her work to express herself, her values and her generation as well”.

2020 also saw the star named as Bulgari’s brand ambassador. The jewellery brand’s CEO Jean-Christophe Babin expressed that the partnership was an ideal fit as Zendaya epitomised “the Generation-Z spirit”.

The year before, she landed a global ambassadorship role with makeup giant Lancôme, joining the likes of fellow ambassadors Taylor Hill, Lupita Nyong’o, Lily Collins and Penelope Cruz. The brand applauded her charisma and influence in the realms of film, music and fashion, as well as the ‘youthful and unique’ approach she brings to beauty.

Hunter Schafer, the transgender actress known for playing Jules in the show is certainly no stranger to the fashion world, having modelled on the runway for Dior, Marc Jacobs, Miu Miu, Rick Owens, Coach, Helmut Lang, and more. In 2020, Schafer was announced as a global brand ambassador for Shiseido Makeup. According to global artistic director James Boehmer, the new face was chosen because she represents “the current zeitgeist of beauty in that there are no rules, no boundaries, and no restrictions”.

Australian actor Jacob Elordi, who stars as Nate in Euphoria, appeared in his first Calvin Klein campaign in 2019 modelling a pair of the brand’s neon boxer briefs and matching joggers. In 2021, he returned to grace Calvin Klein’s Spring 2021 campaign alongside Megan thee Stallion.

More recently, Elordi was announced as the new face of BOSS’ Parfums and Eyewear collection, amidst the brand’s current aggressive efforts to transform its image to suit a younger generation. The brand stated that Elordi represented the ‘confidence, elegance and inimitable style’, while embodying the changing definitions of modern masculinity.

Elordi has been known to occasionally challenge the confines of gendered fashion, having appeared in photoshoots wearing dangling earrings, corset crop tops and high heels.

In February 2022, Barbie Ferreira, who portrays Kat in Euphoria, was named as the YSL Beauty’s newest US ambassador. Known for her bold and expressive makeup looks, the plus-sized actress will take on her first campaign for the brand’s Lash Cash Mascara, before going on to appear in digital campaigns for the iconic Black Opium fragrance.

Ferreira’s entry into the YSL Beauty family is described as part of the brand’s push towards reaching the emerging Gen Z market. David Iop, vice president of global communications and image at YSL Beauty stated that the actress embodied the brand’s vision for the future, applauding her as “a unique, inspired creative who inspires her community to embrace their edge and individuality”.

Angus Cloud, who plays Fezco in the show, has of late been making a splash in the fashion sphere. He was recently seen rocking bold, stylish get-ups to the most recent New York Fashion Week, having a matching tartan moment with Euphoria co-star Maude Apatow, and sitting front row at Coach’s Fall/Winter 2022 show. It was only a matter of time before brands came knocking, in the hopes of tapping into Cloud’s fashion icon potential.

Sure enough, Ralph Lauren Fragrances made an announcement in February 2022 that he would be the brand’s new face. A digital campaign was also unveiled, featuring Cloud with the iconic Polo Green, Polo Red and Polo Blue colognes.

The actor has not been shy about his deep affinity for Polo Ralph Lauren, sharing that he has over the years amassed over 200 shirts with the iconic pony logo. His character, Fezco, has also appeared on screen a number of times sporting the brand’s shirts. 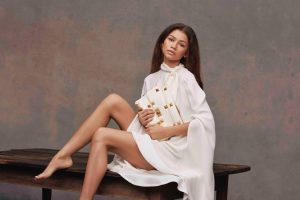 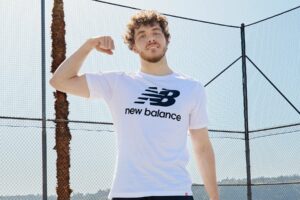